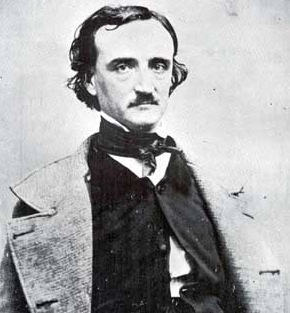 Edgar Allen Poe. How many times have I seen this typo? Enough to drive me mad? Possibly. Sure it's not the most egregious thing in the world (certainly not as bad as the time I saw "Edgar Allen Pie," though that at least was sort of hilarious) but it's frequent enough to get on my nerves.

"Edgar Allan Poe lived at 47 Bond Street in 1845." Have I heard tour guides say that with a straight face in front of a crowd of people? Yes, yes I have.

Have I visited the so-called "Poe Room" in NYU's law school and only to leave sad and disappointed? Indeed.

Did I actually sit through the movie The Raven, and did it drive me slightly mad? Yes.

And did I seek out a factual literary and historical Poe tour of the West Village that would not only focus on the author's creatively significant time in the city but also redress these many, many wrongs? And did I find when I searched nothing but a vague, generic Greenwich Village tour that offered to illuminate the works of Dylan Thomas, Allen Ginsberg, Thomas Paine, and Edgar "Allen" Poe in one feel swoop? Yup.

So I sat down and I cracked open my books and I wrote a script for my own tour. A tour that would combine the true facts in the case of Monsieur Poe while also providing a historical account of the Village in the mid 19th century.

And here's what I came up with.

“Edgar Allan Poe’s Gaslight Greenwich Village" is a 90-minute walking tour that focuses specifically on the writer’s time in New York in the 1840s. On this literary and historical walking tour, guests will visit the site of three of his former homes, trace a path into the past to gaslight-era Washington Square Park, learn of his contemporary rivals and admirers, and see where he wrote some of his most famous works. They'll discover the places that inspired Poe, find out where he read "The Raven" for the first time in public, and even see where he was once treated for a head cold! Interweaving some of his most famous tales with Greenwich Village's macabre secret histories, this tour is guaranteed to delight fans of Poe's literary grotesques and arabesques!

The tours run on Sunday October 21st and Sunday October 28th from 2-3:30 pm. Tickets are $25 per person (or $20 if you book in advance online) and the tour departs from 85 West Third Street, one block south of Washington Square Park between Thompson and Sullivan Streets, in Manhattan. Visit Ghosts of New York for schedule and ticket info.

If you're in NYC on either of these dates, I hope to see you on my tour!
Posted by Andrea Janes at 9:55 AM