31 Days of Halloween - Links of Doom 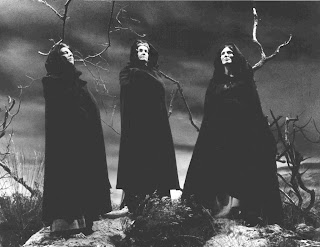 A roundup of links today, because there's a lot of goodness out there in the ether, from ghost stories to dark fairy and folk tales to spooky renditions of Shakespearean witchcraft... with a few vampires murderers thrown in for good measure.

Kristina Wojtaszek's first in a five-part series on haunted folklore over at Enchanted Conversation: "Buried beneath unfathomable layers of time and lore lay the bones of an ancient and surprising story: an evolutionary lineage that descends straight from the thrones of the gods and goddesses of old." (A side note: Wojtaszek is also one of the contributing authors in Specter Spectacular!)

For the horror film connoisseur who think they've seen it all, Notcoming's annual 31 Days of Horror, features a review of a horror film each day, of films that "will not be mainstays of the horror genre, although they possess aspects of the genre’s more salacious or famous entries to which they will be associated."
Gullah ghost stories over at HooDooQ reinforce the old rule that makes us NYC types jealous as hell: Southerners really do have the best ghost stories.

A dispatch from a Jack the Ripper conference, because you know you want to know what goes down at these things.

Colleen Mondor offer the most tremendous roundup of YA horror over at Bookslut, a list that makes me jealous of my younger self and all the dreamy spare hours she had for reading and whiling away (imagine finishing your day at three o'clock every day!).

But since you're a grown up now and chained to a desk until 6 o'clock, why not throw on some headphones and pretend you're working on a spreadsheet while really listening to Philip Pullman's retelling of Little Red Riding Hood.

And finally, to top off another perfect, dreary October day, watch Orson Welles' stunning Macbeth on Blu-Ray, now available from awesome indie distributor Olive Films. The stark, atmospheric black and white is beautiful to watch, and the creeping sense of menace and doom lingers long after watching.