This was my second go-around for this book (I blogged about it five (!) years ago, here). I couldn't remember any of the details and it's funny that in my earlier appraisal I complain about there being one coincidence too many. I didn't notice that at all this time. No, this time I was absolutely swept away. I have to agree with the anonymous commenter in my earlier post that this might be one of the -- if not the best -- detective novels ever written. Coincidence? No. A slow, steady, thorough chase, methodically picking up the pieces. A tacked-on last chapter? No. A final twist that makes one unloved character all the more tragic. Hearse is a perfect book and has a permanent place in my pantheon. What's more, the prose is sublime. Who else but Ross Macdonald would compare a cobblestone street to a dry riverbed.... and have it mean so much?

One added bonus: I found this Anthony Boucher review tucked inside my book: 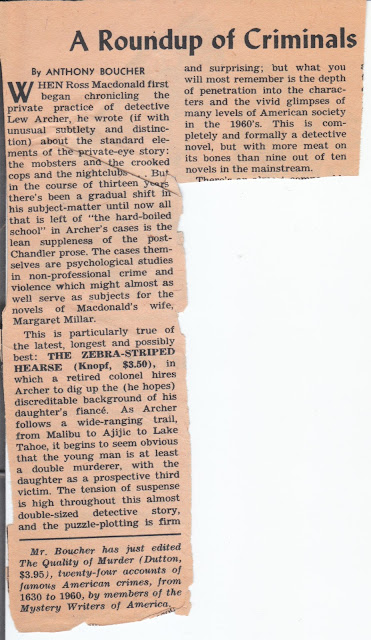 Totally agree on all counts Unusual subtlety and distinction indeed. And there's something so much more poignant about non-professionals mixed up in crime. Human life is bungling exercise, and the amateur in the mystery novel is the best expression of that -- of the mistakes we make that we cannot cover up. I think that's what makes this novel, and all of Ross Macdonald, so devastating.

On a side note, I'm convinced that one minor character in this book is based on Manny Farber. He lives in Southern California, he's an art critic, and his name is "Manny Meyer." The suspect is a painter and Archer takes photos of his paintings to Manny Meyer to judge whether he's a good artist or a total fraud. His art is deemed excellent. I won't spoil it for you and tell you whether that makes someone more or less likely to be a murderer. I'll just let you ruminate on it.... but I will reveal that the man is, in fact, rather amoral. There's only one thing artists really care about, as Lew Archer says: "A good north light, and money to buy paints." How much paint they need, and what they're willing to do for it, remains the mystery...

The first installment of the Beach Noir Book Club kicks off with Raymond Chandler's The Little Sister.

I'll be posting my thoughts about it here, and I welcome others to join in. We can also continue the conversation on Facebook, if that turns out to be a better conversational forum. We're just sort of figuring this thing out as we go and, like Calvinball, the Beach Noir Book Club has no actual rules.

Now that the admin is out of the way, let's get to the book -- no! Let's first discuss the cocktails we drank while reading the book! Yes, that's much better. As I understand it, book clubs are actually just excuses to get together and drink, so it seems appropriate. What did you drink whilst reading this particular Marlowe tale? Did you go classic with the gin gimlet? Scotch? I admit I went for expediency and just drank whatever was on hand. Fortunately for me, in my house that means excellent beverages like Founder's Centennial IPA, which I'll go on record as saying is the best IPA I've ever had. As I write this I realize I'm not aware of many fictional private detectives who are big beer drinkers. It makes sense though. You wouldn't have to pee on all those stakeouts.

Speaking of peeing, this may be the only Marlowe book I've read in which the detective gets peed on. I might be wrong but it's the only one I can think of. He gets peed on by a studio exec's dog, which pretty sums up the way Marlowe feels about Hollywood.

Marlowe cuts a pretty bitter figure in The Little Sister overall. It's 1949 and he's weary. He's been wearing out shoe leather for a decade, and he's pushing forty. He makes a lot of references to being "pre-war" and just seems goddamn exhausted. The book is filled with gripes against L.A. and Hollywood people in general, with plenty of digs against "Bay City" thrown in as well. The action starts off with Marlowe alone in his office, swatting a fly. The rest of the plot follows a typical Chandlerian trajectory, which is about as logical as the flight-pattern of said housefly. I won't go into plot details but let's just say it involves gangsters and starlets. I will say though that the no-good girl who shows up in Marlowe's office is spectacularly crazy and her name -- Orfamay Quest -- was so unusual as to be simultaneously distracting and utterly believable in a Bible-belt sort of way.

At this point I want to throw a question out there for my fellow book clubbers: were you distracted by the name Orfamay? What was he driving at with that appellation? Discuss.

Orfamay, and every other woman in the book, throws herself at Marlowe. This started to become comical to me after a while. In fact, much of the book felt like a catalogue of detective cliches -- not necessarily in a bad way, but in an (again) slightly exhausted or mocking way. Chandler draws attention to it himself, repeatedly, mentioning the clunkiness of the dialogue in a self-referential manner. Between the weariness and the repeated ocean references, I was frankly starting to worry about Marlowe a little bit. Keep the lights on the pier boys, I think I spot a jumper.

Not only did Marlowe seem extremely tired of life in general, he also seemed to be incredibly isolated and, more than once, his rambling monologues betrayed a tortured and fevered mind.  Take for example his reverie in chapter thirteen, as he drives alone of an evening. Though he says "there was nothing lonely about the trip," I didn't quite buy it:

"Tired men in dusty coupes and sedans winced and tightened their grip on the wheel and ploughed on north and west towards home and dinner, an evening with the sports page, the blatting of the radio, the whining of their spoiled children, and the gabble of their silly wives... Behind Encino an occasional light winked from the hills through the thick trees. The homes of screen stars. Screen stars, phooey. The veterans of a thousand beds. Hold it Marlowe, you're not human tonight..."

Poor Marlowe! (Side note: That passage also reminded me of the SNL sketch The Californians: "I drove east on Sunset but I didn't go home. At LaBrea I turned north and swung over to Highland, out over Cahuenga Pass and down on to Ventura Boulevard, past Studio City and Sherman Oaks and Encino...")

The water imagery, despite making me fear for Marlowe's mental health, was one of my favorite aspects of the book. Chandler writes sentences like, "It was as full of meaning as the ocean is of salt," "She looked at me as if I had just come up from the floor of the ocean with a drowned mermaid under my arm," and "They had the eyes cops always have, cloudy and gray like freezing water," and so many countless others I stopped keeping track after a while (but never stopped loving them). Though the plot of The Little Sister is a bit thin, Chandler's turn of phrase doesn't disappoint. Like when he spells out Orrin Quest's last name for a slow-witted receptionist: "Quest. Q as in quintessential, U as in uninhibited, E as in extrasensory, S as in subliminal, T as in toots." For that sentence alone, it was worth reading this book.

We had a few really awesome responses to this book; you can find them in their entirety in the comments section, but I've lifted a few gems for you:

"...Reading this book, I had a decaf iced vanilla latte. It's kind of like coffee. Just like the LA of today is kind of like Marlowe's LA.

Thoughts on the book... definitely not Chandler's best. I've read it before and it was a bit of a slog to read it again. I do like Orfamay, though. The name -- Orphan? Orpheus? Orifice? I have no idea.

One question: in chapter 15, Marlowe says to Orfamay: "You said Orrin wasn't the black sheep in your family.... And when you mentioned your sister Leila, you sort of passed on quickly as if the subject was distasteful."

OK, I caught the black sheep reference when Orfamay made it, but I cannot for the life of me find any mention of sister Leila before Marlowe brings it up. Where is it? [Anyone? Ed.]

The weirdest bit of this book, for me, is Chapter 30, when Marlowe is hanging out with a cop -- or is he? It's such a dreamlike chapter, I wasn't sure if it was supposed to be a dream. And then the guy vanishes. The end of Chapter 31 has the same weirdness.

Chandler whips out some of his most funny, vicious, mean writing, like a punch to the face. It got so nasty, but with that same crackling dialogue that translated so well to Chandler's screenplays. My favorite example:

In fact, coming right on the tail of Chandler's brief Hollywood dalliance writing DOUBLE INDEMNITY and THE BLUE DAHLIA, his intense disdain for actors and studio execs really gets an airing (although I notice screenwriters escape unscathed).

There’s one of those funny moments where I read a line and realized it had been lifted by a favorite songwriter of mine for one of their songs! Chandler writes, “looking up at the pale sky stars which know enough to keep their distance from Hollywood”, and in the Nick Cave song “Dig!!! Lazarus Dig!!!”, Cave sings of the resurrected Lazarus, “he thought even the pale sky stars were smart enough to keep well away from LA”! Whether as a swipe or homage it’s a killer line and greatly repurposed.

Towards the end there’s this kind of languid nostalgia for “Old LA”, when it was just dust and sun and modest people eking out a living. I think it’s appropriate that Marlowe has come to so fully define what we would consider to be “Old LA” that Marlowe’s world is the one that excites us – even if our vapidity is largely unchanged from what he is raging against almost 70 years ago…

Just like Andrea and Flicker I was fascinated by the Steinway-playing cop in the holding tank – I’d like to think he’s a phantom, that the game he’s playing with Marlowe is really Marlowe’s brain working out the hand he’s been dealt…

So -- we all agree, a very surreal addition to the Chandler canon, especially the dreamlike card-playing scene. And I love the insights re: Nick Cave. It's always good to know one's on the same page as Nick Cave.

To all those out there in the ether: how's your beach reading going? What's your take on The Little Sister? Is the Beach Noir Book Club beginning to make life seem like one vast, unrelenting ocean of despair? And is the ocean starting to look like a good place to hide the corpses? What did you make of Bay City -- haven't beach towns always seemed inherently slightly seedy? Chime in, won't you?

And I'll see you back here on June 22nd for The Zebra-Striped Hearse. In the meantime, check out our Facebook page for updates and to follow the conversation. If you have any questions about how to join, where to buy books, etc., you can always drop me a line at bourbonandtea [at] gmail [dot] com.