Well, this is a whole lotta crap: Detox Diary 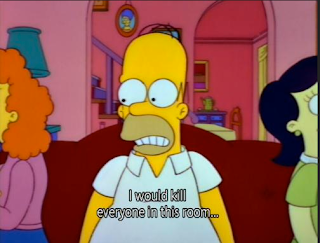 I recently decided to go on a beer detox, just to see what would happen. Part of me was simply experimenting, setting a pointless challenge for myself, which is a thing I do sometimes for some reason. Another part of me realized that the heroic amounts of beer I consume on a regular basis might make me an educated consumer, passionate beer enthusiast, and generally happy and satisfied person, but it was also making my tummy start to hurt. Now, I'm no scientician. I'm not even sure where in the human body the liver is located. But I knew that my liver was politely asking me for a little break.

And so I decided it was time for the Homer Challenge: No Deer For A Month.

Naturally I assumed that everything about my mind and body would immediately become awesome right away. I'd bound out bed in the mornings, a monster of clarity, efficiently performing tasks and activities with ease and grace. I'd remember things like names and faces, my IQ would jump ten points, I'd drop a ton of weight without trying, and my skin would look fresh and hydrated!

By any measurable standards, I'm just as dumb as I was a week ago. I have signed up for Lumosity, so I'll be tracking this on a quantifiable level. But, anecdotally, I can say I'm not finding it any easier to learn or retain new information, nor am I finding my reaction time, speed, attention, or any other function significantly improved. In fact, due to the extreme stress of staying sober, I am actually doing worse at certain activities. Case Study #1: Total crap at pub quiz last night. My hypothesis? When you're relaxed, you perform better at everything. When you're drinking soda water with lime, you are not relaxed, therefore you arse up the pub quiz and forget things like the fact that Alfred Nobel invented dynamite.

Actually, I'm exercising less now than I did when I enjoyed a beer or two with dinner. Back then (a whole long week ago!) I'd try so hard to exercise those calories away that I'd end up doing lots of cardio. These days... meh.

Man, am I irritable! I want to slap everyone I see. I'm constantly twitchy, impatient, and annoyed. Everyone's enjoying themselves but me! I even got into a fight at the aforementioned pub last night over a question on the quiz. I was right, and no one else could see that except me! Because everyone is drunk and stupid and doesn't care about the really important things like FACTS and RULES! God damn it!

Fact, hops make you sleep. A nice IPA in the evening was just the thing to cure my insomnia. I slept the sleep of the just. These days I toss and turn until three in the morning. Ironically, sleep deprivation results in the cognitive equivalent of consuming three to four drinks, so therefore this morning I am about as alert and refreshed as a very hung over person. It's all punishment, no fun, up here in the big ole sober house.

In conclusion, this is bullshit.*

However, I'm determined to stick it out for the full month and, who knows, maybe everything will become amazing in, like, a week or so. But I'm pretty much ready to conclude at this point that beer really is proof that God loves us and wants us to be happy (I know Benjamin Franklin didn't actually say that, but who cares, because facts are totally fungible and open to interpretation, according to the stupid moron who runs the stupid trivia pub quiz) and that teetotaling is for the weak.

The one good thing I have to say about all this is I think it's making me a better taster. I did have some Fruet this weekend, because when someone opens a bottle of that shit, all bets are off, and I think I was more sensitized and attuned to flavor nuances after my brief drinking break. In three weeks, when I return rested and refreshed from my beer exile, I think I'll notice and taste things in ways I never picked up on before. All of which will make me a better drinker... so nothing is wasted, really. So to speak.

* Just want to go on record and say that I intend this all from a personal standpoint, and of course if you have an actual substance abuse problem then Beer = minus a million points and Temperance = plus one billion.
Posted by Andrea Janes at 8:14 AM 6 comments: