Porter Wagoner with The White Stripes

I saw the Wagonmaster again last night! He opened for the White Stripes at Madison Square Garden, and he was supreme. He played with Marty Stuart, who produced his last album, I hear, and he sang such greats as "I've Enjoyed As Much Of This As I Can Stand" and "Cold Hard Facts of Life" (which is an incredibly funny and dark song) and it was such a treat because he played a much longer set than he did at the Opry (where I went with a handsome stranger and fellow fan). I thoroughly enjoyed it and was really excited to see the other country fans in the audience who loved it, too.

Nick Cave's outfit, Grinderman, followed, and they're thoroughly nuts. Their songs "Depth Charge Ethel" and "No Pussy Blues" are riotous.

The White Stripes were great too -- Jack White is so mannerly -- and they played "Little Ghost," which I love, and Jack saluted Porter as "the best dressed man in country music" 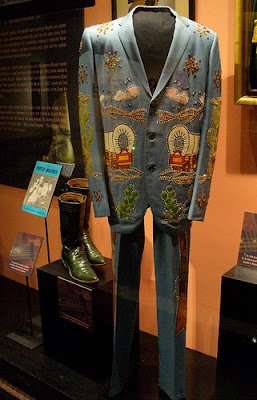 and talked about how privileged we were to have him with us that night. It's so pleasurable to see a nice young man who knows about The Music.

Oh, and Porter Wagoner's on Letterman tonight ... I'll be watching. Am I turning into a Wagonhead?
Posted by Andrea Janes at 12:45 PM No comments:

An Unkindness of Ravens

I finished Ruth Rendell's thirteenth mystery today, and found it to be a bit ... silly. I generally love the Inspector Wexford books but was a bit let down by this one. It was so over-the-top in some parts, and utterly simplistic in others, that I sometimes felt I was re-reading one of the lurid pulpy horror paperbacks that so interested me as a young teenager, it was that juicy and salacious. At times I couldn't take it seriously at all and wondered if she was just having fun. Like, "Oh fuck it, let's just throw a secret marriage in there."

Which, in itself, can be kind of fun.

Of course, Rendell knows how to keep the pages turning, but it felt like she really struggled with this one. There were even self-conscious admissions that the story was flagging ("Chandler says when you don't know what to do, have a man walk into the room with a gun") and she'd throw in new elements here and there until it finally felt like she was just heaping soapy absurdities on in an effort to distract the reader from the lack of story.

The most inane elements included Burden's wife moping over the fact that their unborn baby was a girl, a group of militant teenage feminists (man-killers, all!) and a little incest subplot that of course turned out to be a lie (because everyone lies about being raped!) and strange asides about feminism and femininity ( two wives each representing opposite poles of the monster that is Woman, from the simpering twit to the sexless hag) until a reader gets to wondering what Rendell's trying to say about feminism here. She must be making fun of anti-feminism. Radical feminists who stab unwary men? Funny joke, yes? She even threw a lesbian gym teacher in there! She has to be taking the piss. Dry British humor, yes?

Luckily Rendell's a smart technician, so I could ignore the distressing subtext and let the story play out in all its campy goodness. Plotwise, you've got what seems to be an ordinary wandering-husband job, that later turns out to be an elaborate set-up and murder. Add to the mix a fun secret wife and kid (ooh, bigamy!), and two sets of plotting, scheming women (the sets of mothers and daughters) and you've got plenty of motives for revenge.

Only Wexford comes off as a bit of a dullard in this one, and spends way too much time looking for a suspicious typewriter (to find out who typed the victim's resignation letter) and on other false, niggling leads, when anyone could see it was the mothers and daughters who did it.

This was by far the most transparent Wexford mystery I've yet read; very, very thin and rather disappointing over all. And bizarre. Just want to add that yet again. Thoroughly bizarre. I'll never understand what Rendell thought she was doing with that feminist group, other than finding a cool thing to do with the collective noun for ravens.

So what makes a gal keep on reading a bad book? Knowing it's going to turn out badly, maybe she waits in vain to see if it'll get better. (More likely Rendell is just good at turning the screws when needed.) Or, maybe one can thoroughly enjoy a rotten book, because criticizing is fun and it's definitely exciting to see what new stupidity the author will think of next (plus it's always fun to speculate if she's joking or not). It's definitely not a well-written novel, stuffed with absurd cliches and literary pretension (Wexford attends a play about incest, The Cenci, just before discovering incest figures in his own mystery; numerous allusions to detective stories, plot devices and criticism pepper the text, leading one to presume that Rendell spent wads of time staring at her bookcase while writing this, hoping to paste something together; Wexford quotes constantly, irritatingly) and the final explanation is both psychologically pat and vaguely insulting (fake rape accusations are always a deal-breaker for me, as I view them as not only the most irritating of plot devices but they also make me extremely uncomfortable and generally icky-all-over) AND, finally, there was just a little too much coincidence for my taste (the second wife just happens to be dating the typewriter-repair man?).

Much of the pleasure in mystery-reading comes from characterization as much as plot, and the creepy half-sisters were pretty compelling, as were the monstrous wives, though I'd liked to have known more about them, particularly the perpetrator. Maybe, once she realized it wasn't very good, Rendell piled on the scandalous elements, knowing full well it was silly, but still striving to keep the reader mildly entertained. The only really satisfying twist came at the end of the story, because the motive for the murder was a little different than the obvious (revenge). It was actually quite pragmatic, and a rather sad commentary on the state of women's education and financial dependence on men -- so maybe she did make her point after all.
Posted by Andrea Janes at 7:16 PM No comments: 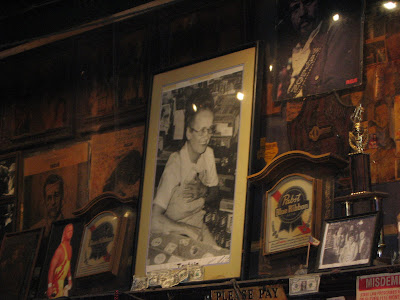 First off, I learned the real difference between whiskey and bourbon. Whiskey involves a charcoal mellowing process; bourbon puts the distilled liquor right into oak barrels, no charcoal. 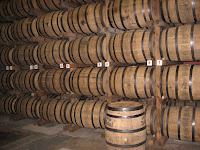 Distillers of the respective liquors will each lay claim to theirs being a superior process. I find each to be delightful. But of course you know where my loyalties lie (cf. name of website). But, if I do happen to indulge in a nip of whiskey, my brand of choice will be George Dickel whiskey. Why? Because I enjoyed the tour of their distillery, even if the waterfall pictured in their brochure turned out to be nothing but a creek.

It was still pretty though ... 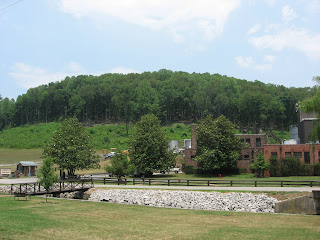 The tour guide was a total sweetheart ("Every time I go into a bar ... not that I go into bars ... seems every time I do, someone wants to beat me up ... must be something about me ...") and I learned a lot of useful information about what happens to you if you drink moonshine (the iron content in the water will give you heavy metal poisoning) and that anywhere you distill corn liquor yourself, you're going to get a black mold that grows on everything, which is why you have to move your moonshine still from time to time. (Black tree trunks = dead giveaway.) I also learned that Merle Haggard drinks Dickel #8, which they don't make anymore. Take that, Jack Daniels.

Incidentally, Lynchburg is a really scary company town entirely owned and operated by the Jack Daniels' corporation, and the entire county's on the payroll. It's strange, and I wouldn't be fooled by their ads in which they claim to live in a sleepy, old fashioned town, because it's slicker than a New York City lawyer in a rainstorm. I and my gentleman friend had "lunch" in Lynchburg (at 11:00 in the morning; everything in Tennessee opens and closes absurdly early) at a little place called Miss Mary Bobo's Boarding House.

It was a great lunch (featuring the best fried chicken I ate in Tennessee, great candied apples, crispy fried okra, tasty turnip greens, which I thought were called "collard greens" but maybe they're not, and an unfortunately disappointing pie called "chess pie" which I'd skip if I were you) but the Stepford-y vibe I got from the hostess was kind of freaky.

So if you find yourself in Lynchburg, skip town immediately and head to Tullahoma, where you'll find the much more satisfying Dickel Distillery.

Nashville itself is full of old people. It's great.

I particularly enjoyed touring the Ryman Auditorium, aka the Mother Church of Country Music, where I imagined Patsy Cline up on stage (though they were setting up for, um, Tesla) and snapped pics of Loretta Lynn's sequined evening costumes. 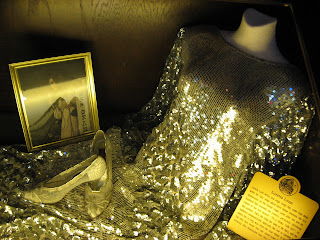 The Ryman housed the Grand Ole Opry back in the day, but later the show was moved to its new location in, well, "Opryland." Yeah, I have a little bit of disdain for the glitzy, mall-like new opry. I guess I like doing things the old way better.

But I saw Porter Wagoner at the new opry, which is awesome.

The Country Music Hall of Fame is a no-brainer; you have to go there if you're in Nashville. It's a beautifully designed museum, obviously curated with care and love. I saw John Loudermilk speak there, and he favored us with a few songs, some hilarious anecdotes and words of wisdom/advice ("You have to reach through the veil"). I love that man. 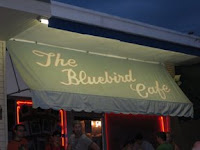 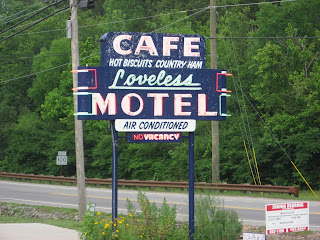 Foodly goodness was obtained in the form of biscuits at The Loveless Cafe, and pancakes at the Pancake Pantry. I was so enraptured with the vittles that I couldn't even snap a photo. But trust me, they were damn good. The pancakes at the pantry were divine. They were -- sigh -- much much better than mine. My god they were good. I wish I was eating their apple cinnamon pancakes right now. The Elliston Soda Shop was also a good old fashioned meat-and-three lunch counter, but don't go overboard with nostalgia and get a chocolate malted because they sound cool -- stick with the shake.

Also: I rode a riverboat: 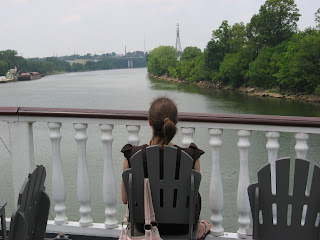 *For Spinster Travelogue The First, click thusly and scroll down.

Posted by Andrea Janes at 2:11 PM No comments: