I just this minute finished Ross Macdonald's "The Zebra-Striped Hearse," a book that made me want to hide under my desk at work, George Costanza style, so I could finish it, that's how gripping it was. Macdonald's one of the big three kahunas of the hardboiled detective novel -- along with Chandler and Hammett -- and his detective,
Lew Archer, is a paradigmatic figure. I immensely enjoyed all the twists and turns the novel had to offer (a lot of ins, a lot of outs) and I like the way Macdonald handles coincidence in this one -- it's just enough to string you along but stops a hair's breadth short of far-fetched. I'd like to read more books in the series; fortunately, or unfortunately depending on where you're sitting, there are twenty-odd books in the series, meaning I'll soon need to deploy a small army of spinsters to help me read.

Incidentally, I just found out there's a book called "Maigret and the Spinster," which I can't wait to read of course. Oh, and I found out that Macdonald's fictional name for Santa Barbara was "Santa Teresa," which is what Sue Grafton calls the town in her Kinsey Milhone books (this pleases me). I'm full of wonderment today.

In any case, I hope the next one I read is also a vintage copy (my "Zebra-Striped Hearse" was a first edition if that means anything) because they're so delightfully smelly and this one came with a great publisher's note:
"Like Chandler and Hammett before him, Ross Macdonald writes for the general literate public. That mystery fans also like his work is all to the good."
Posted by Andrea Janes at 4:52 PM 4 comments: 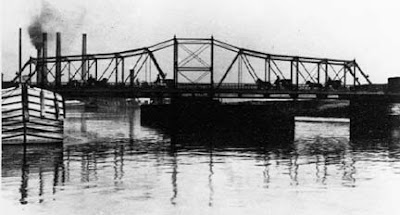 I'm so excited about the forthcoming Queens Noir anthology from Akashic Books. They do a whole series of noir, with each book set in a different city. It sounds like an incredibly fun series. Brooklyn Noir is already in its third, highly-acclaimed, volume (Pete Hamill's short story, The Book Signing, was an Edgar nominee).

My reading list grows ever longer! Luckily, I can sneak these short stories in between novels. Here's the link: http://www.akashicbooks.com/noirseries.htm

But wait, I almost forgot the best part. Not only is my adopted borough featured in the series, but my native town is also represented -- Toronto Noir! I couldn't be happier, and I hope this gives some Canadian writers their due. No author info is available on the site yet, but this gal hopes to see lots of fresh Canadian talent. We're a dark, twisted people.
Posted by Andrea Janes at 11:10 AM No comments:

Here's a fun website for those interested in learning more about French Crime Fiction (and really, who isn't?):
http://www.crimeculture.com/Contents/FrenchCrimeFiction.htm
Posted by Andrea Janes at 12:27 PM No comments: 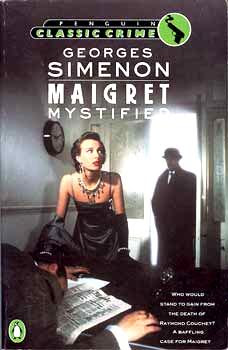 I've found a new (to me) author that I want to praise here: Georges Simenon. I knew him only sort-of, only by name, but he's huge. Literally, his body of work includes 212 novels and over 50 film adaptations.

I'm completely hooked after reading only one book and now I want to read all the inspector Maigret books. I haven't like a gumshoe this much since Inspector Wexford.
Maigret is a gruffly affectionate, solid, down-to-earth type. In "Maigret Mystified" he tracks down the killer of Raymond Couchet, an entrepreneur in the pharmaceutical trade, with the requisite (in French novels anyway) wives and mistresses, each named in a suspicious will. Couchet's fortune was amassed only after years of reckless gambles with fate, which so exasperated his first wife that she left him to shack up with a petty official because he had a "good pension." Now she resides in an apartment complex that overlooks his offices, a cruelly ironic slap in the face to her, as she must witness her first husband amassing greater wealth by the day while her new husband fails to live up to his initial promise. Maigret trails Couchet's mistress, son, and second wife, but the trail ultimately leads back to the first wife, now Madame Martin. Has Couchet's success driven the mercenary woman to murder?

This book is deceptive. It's a mere 138 pages, doesn't look like much, and doesn't start out particularly compelling either. But then it builds marvelously, layering on these neurotic characters in this claustrophobic apartment, until he ensnares you in his dark chamber-drama. The bourgeois petty official, Monsieur Martin, becomes an object of pity and also of disgust; his wife is just monstrous. She is everything grasping and greedy, she is shrill and and tyrannical, she constantly bemoans her bad luck and misfortune, an emaciated harpy. This couple wears on Maigret's nerves, and he finds himself longing for ruthless dangerous killers to deal with instead of "all this slimy greyness, these family quarrels, and the crime which was still inexplicable, but whose haunting horror he could guess at." The creeping horror of the Martin family soon takes over the book, and this reader found herself almost rooting for poor henpecked Monsieur Martin, if only he weren't so banal himself. When he breaks down in front of Maigret he laments his lot as a bureaucrat: "My whole life ... thiry-two years ... every day ... at nine o'clock ... never incurred a reproof ... and all that for --" Ah, what's it all about Monsieur Martin, you weak-willed conformist! In his frenzy, he topples his radio, and suddenly the bean-counting, paper-pusher re-emerges: "A set that cost me twelve-hundred francs! I had to wait three years before I could afford it."

The mystery really takes a backseat to the indictment of the bourgeoisie, but the Martins are so loathsome and suffocating that they'll stay with this reader for a long time, memorable villains because of their very blandness.

No one can do class-commentary like the French! And boo-sucks to gold-diggers everywhere -- only madness awaits you!
I can't wait to read more Maigret.
Toodles,
Auntie Darling
P.S. Here's a link to something fun.
Posted by Andrea Janes at 6:49 PM No comments: