Downton is my Bookshelf Dollhouse 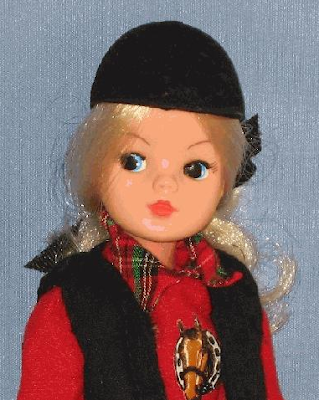 By now everyone in the world has finished watching Downton Abbey, so I can safely blather on without fear of spoiling anything for anyone. I think my general impressions of the show align, more or less, with everyone else's: it's soapy, rather stupid, and eminently delightful. I am especially fond of Lord and Lady Grantham's extremely reliable facial expressions; you can always count on Lady Grantham's mewling Cheshire cat smile and Lord Grantham's range of shocked/indignant/shocked-again furrows. I'm also fond of the repetitiveness and glacial forward momentum of the story lines, from Anna and bloated Mr. Bates' "we'll-get-married-we-can't-get-married-we-must-get-married" ad infintum to Matthew and Lady Mary's version of same. Mr. Bates, it must be said, is one of my most hated characters, second only to human qualuude Lavinia Swire, and I admit to yelling loudly at the television during his trial, "Die! Die and join Lavinia in boring person heaven!"

I am as fond as everyone else of the Dowager Countess, a.k.a The Chicken Lady, and, also like everyone else, wish fervently I had a Carson of my own. And, like the rest of the masses, I am amazed, absolutely amazed, that the timeline of the story world encompasses an incredible eight years during which practically nothing happens. I induced my husband to watch exactly two episodes and during the finale, when Matthew was about to propose to Lady Mary, he said, "She's not going to New York. Nobody is. Nobody ever leaves that house! It's like The Exterminating Angel!" To date this is the single best summing-up of the series I've heard.

But I'm not here to talk about what I think of the show. Everybody else has already done that. I'm here to talk about how strikingly the plots of Downton Abbey resemble the Barbie games of my childhood. Because this is very important stuff.

To begin: the manor house. As a child, my sister and I had a large, white bookshelf in the bedroom we shared at our dad's house. We thoroughly cleared all books off this shelf -- where we put them I can't recall -- for the express purpose of turning it into a doll house, diorama-style. It was a three-story house, with a convertible rooftop/fourth story, depending on need and circumstance. A roof was always good to have, because you never knew when you'd have to stage a suicide, so we generally kept that space empty for trysts, pacing widows, and lonesome jumpers.

The grand white bookshelf was all but bedecked with Corinthian-capped columns in our imaginations and its furnishings -- Kleenex box settees, facecloth bedspreads -- were absolutely magnificent in our own minds. For some reason, though we had an enormous collection of Barbie dolls -- around twenty or so -- we never had a single piece of Barbie furniture. Which was fine by us, really, since pink would've been out of place in the heavy, claret-colored damasks (red facecloths) our manor house demanded.

A grand house demands a grande dame, and in our world that role was filled by Darcy -- or possibly Darci. I'm unsure of her provenance, manufacturer, or country of origin (if anyone knows, do drop me a line). I'm not sure where we got her from. But she was a good inch taller than Barbie, and had impressive snow-colored hair. Due to her dignified tonsorial coloration, she was the family matriarch and her word was law on the estate -- our Cousin Violet, if you will.

There were always several bickering sisters, all pretty (sorry Lady Edith) and always scheming. Well, there was generally one plucky, virtuous sister (usually played by Sindy, a doe-eyed British doll) who would of course be Lady Sybil, and one unrepentantly evil sister -- Lady Mary, obviously. The evil sister invariably pushed people off the roof, destroyed her other sisters' chances of marriage and happiness, and never knew her own heart.

War was of course a prerequisite for any game, as it was the only reasonable way to get rid of all the men. Again, despite owning several Barbie (and Barbie-type) dolls, we failed to ever acquire a single Ken. I think we knew even then that Ken was ridiculous. Well, we did have one Ken, given to us by our stepmother; he was a vintage specimen, and relatively dashing, given his absence of a puffy '80s mullet. Unfortunately he came to us clad in nothing but a pair of red swim trunks, which we promptly lost. (They must be somewhere in small accessory heaven, along with untold pairs of shoes.) In the name of decency, my sister and I colored a replacement pair of swim trunks right onto his nether regions in a most unfortunate shade of blue.

Ken was generally away fighting one war or another, and when he did come home he was always wounded and maimed -- which didn't prevent the sisters from fighting over him. The only other male creatures we had were two hand-knitted clown dolls with terrifying faces. These generally played the role of deserters, who would prowl around the house until Darcy took up her gun and shot them. So Ken got the bulk of the action, perma-swimtrunks notwithstanding. The obvious Downton analogue here is Cousin Matthew, who was briefly wheelchair-bound until Hey! he could walk again. Another storyline lifted straight out of my childhood Barbie games, I might add. Ken was invariably resurrected to full manhood by the miracle cure of the good sister's kiss, though generally his amnesia made him think the bad sister did it and then he'd propose to her and no one could stop their wedding except the noble Darcy who had seen everything and sang like a canary.

As in Downton, our manor house was full of eavesdroppers.

And so, this season, while other Downton viewers wrote inane yet highbrow articles about history and cultural necrophilia, I just laughed and reveled in the nostalgia of seeing my old Barbie games brought to life with human action figures. If I am right, Cousin Patrick will make a reappearance next season, hopefully with a brand new, handsome face.
Posted by Andrea Janes at 4:01 PM 1 comment:

I recently did a Boroughs of the Dead giveaway on Goodreads and was surprised to see I got over 700 entrants. Needless to say, there were many more people who did not end up with a book than who did. So I decided that, in a sort of Presidents' Day Sale, I'd sell, for one week only (wait for it), the Kindle edition of BotD for a mere 99 cents! 99 cents! You can't get anything for 99 cents! Well, you can get a small plastic cat wearing an apron that says "I Love Grandma" at the Ansonia Pharmacy on 7th Avenue, but that's it. Other than that you really, honestly can't get anything for 99 cents. Not even Boroughs of the Dead on Kindle. Except for the next week, during which I tear a hole through the fabric of space and time to make this possible for you, my loyal readers.

You're welcome, America.
Posted by Andrea Janes at 3:43 PM No comments:

Labels: Boroughs of the Dead 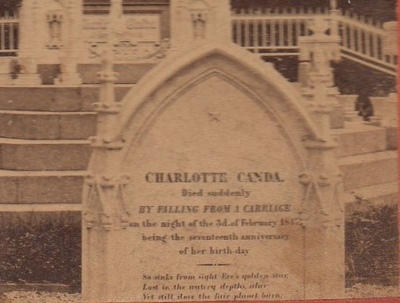 My obsession with Charlotte Canda is well-known by readers of this blog or of my book, Boroughs of the Dead: New York City Ghost Stories. Charlotte Canda was a Victorian-era debutante who lived in New York City. She died in a tragic accident on February 3rd, 1845: her 17th birthday.

According to the historians at Green-Wood Cemetery, where she is interred,

The story of Charlotte Canda and the creation of her monument is a true Victorian drama, filled with tragedy, symbolism and beauty. Charlotte was the only daughter of Charles Canda, a Frenchman who had served as an officer in Napoleon’s Army and later emigrated to America.
On Charlotte’s seventeenth birthday, as she was returning home from her party in a storm, she was thrown from a carriage when the horses bolted. She died in her parents’ arms shortly after the accident.

Her tomb is an exquisite "richly carved Gothic Revival structure in the form of a tabernacle [and] an open, arched canopy flanked by two slender spires contain a portrait statue of the young woman wearing a garland of seventeen rose buds representing the years of her life," though when I look at it it seems more to resemble the bed of a Sleeping Beauty in a fairy tale than a tabernacle. I can imagine her slumbering there, frozen in time. (She'll never wake to her lover's kiss, though; in a sad post-script, "her fiance Charles Albert Jarrett de la Marie, a French nobleman, took his own life out of the grief of losing Charlotte. He is buried in the adjacent plot marked by an elegant headstone bearing his coat of arms.")

Victorian-era New Yorkers were quite taken with the tragic tale of the beautiful Charlotte, and her grave became a major tourist attraction. I can certainly understand why; her story is captivating and the monument itself is arresting. Most incredible of all is the designer of her monument: Charlotte Canda. 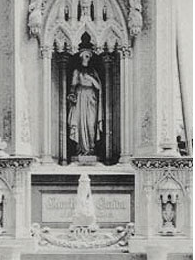 The artistic Charlotte had been designing a monument for her recently deceased aunt and had sketched the ideas for it on paper. Her father adapted the design concept and personalized it for Charlotte by adding her initials, musical and drawing instruments, books, sculptures of her pet parrots and other symbolic details. The concept featured a niche containing a portrait statue of Charlotte with a star above her head symbolizing immortal life.

When I first read this, I was so taken with the concept of the pretty girl who made her own grave that I decided to immortalize her in a story. I did so in "A Fitting Tribute," a ghost story of Victorian New York. Since today is February 3rd, I'd like to offer the free story as a gift to my readers in tribute to Charlotte, who will not be forgotten as long as obsessive writers live next to Green-Wood. The real story of Charlotte will linger in your mind. (My fictionalized version is scandalously inaccurate, but don't let it fool you.)

Happy birthday and seventeen pink rosebuds to you, Charlotte.
Posted by Andrea Janes at 7:08 AM 1 comment: