Well Fellow Spinsters,
Seeing as how this is a holiday and all, I haven't been reading much or even watching anything of note (except, of course, House ... sigh ... so dreamy) but I *have* been eating and drinking a lot, so in the spirit of the season, here's another tasty recipe for:
"Toblerone Cookies" 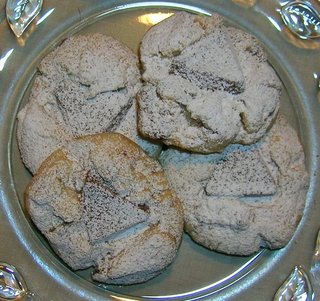 Take a cuppa sugar,
Two cupsa butter,
Blend 'em together real good for five minutes,
Then take 3 and 1/4 cupsa flour, sifted together real good like with 1/2 a cuppa rice flour,
Add it slowly into the sugary buttery goodness,
Knead that up for two or three minutes,
Drop little tablespoon size dough balls onto a cookie sheet,
Cut up two nummy Toblerones, stick the triangles on top of your cookies,
Bake 'em in a oven (that you thoughtfully preheated to 325 degrees before you started all this) for 20 - 25 minutes,
Cool those cookies for 10 minutes,
Sprinkle with icing sugar like pretty snowflakes on a chocolate mountaintop,
Serve up to your bestest friends,
Bask in your domestic goddessness ... dream about the day you have a big house in the country and your own cranberry bog and Martha Stewart comes over to trade tips, both stock and recipe.
Posted by Andrea Janes at 6:58 PM No comments:

The Holiday in my Mind

You know those dreams where you think you’ve been enrolled in a class all semester but you didn’t know it, so you’ve been missing class and now you’re failing, and you’re in a panic???? I had a moment like that recently, but awake, where I suddenly remembered that I HAD A BLOG! Now, I know it’s common practice to blame things on being "busy" but I really have been busy, and I don’t mean holiday shopping. No, fellow spinsters, I’ve finally come to terms with the fact that working in independent film doesn’t pay the rent, and I’ve taken a second job. I’m now moonlighting as a waitress (a sassy waitress) and it’s been a bit much, working seven days a week. Luckily I’m only on six days this week, so I oughta have time to write this weekend. As for now, life is just a whirlwind of workin’, bakin’, and drinkin’, so for today I’ll just leave you with a little recipe to lighten your load this holiday season. I call it the Hot & Tart, and it’s an infectious beverage invented by me and my roommate, a fellow spinster aunt.

The Hot & Tart
A Cocktail for Women of Loose Morals
Take:
3 fingers of bourbon
A jigger of cranberry juice (the unsweetened, health food store kind, you know, the kind you drink to keep your hoo-hoo clean)
A splash of ginger beer (ginger ale works OK too, if no ginger beer’s on hand)
Mix ‘em all up, over ice, and garnish with lime, if desired
Drink up. Say something witty.
Posted by Andrea Janes at 9:42 AM No comments:

Why Would A Hot Girl Write A Book?

I was completely, utterly prepared to hate this book, "Special Topics in Calamity Physics" based merely on the author photo ("Oy, you're not that hot," I thought when I saw her deer in the headlights stare on the jacket) and the accompanying comment -- tongue in cheek or not, still asinine -- made by the person who lent it to me, something along the lines of "Why would a girl that hot want to write a book?" (Um, what?) Then, as I made my way, no slogged my way, through the first coupla hundred pages of name-dropping to get to the real story, I still hated it. I failed to be dazzled by her brilliance, remaining merely annoyed at her pretentiousness. For about 350 pages all that happened was that Blue (our "preternaturally erudite" heroine, barf) moved to a new school and made some questionable new friends, including a teacher who is probably a Bad Influence. I just wanted her to hurry up, but I guess all those witty allusions can slow a girl down. Anyway, she finally, finally got to the story and then when she did it was actually pretty decent. I found myself intrigued by Blue's girl sleuthing (her character became a lot more likable at this point, too) and when I had to break from the book to go to work I found myself wanting to return to it to finish it & solve the mystery. It was a very satisfying mystery, judiciously revealing just enough, yet leaving one or two fun surprises for us at the very end. 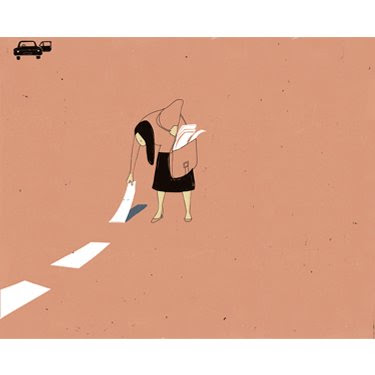 So, author, since you are capable of writing a decent mystery with some great characters and a winsome heroine, can you leave the whole undergraduate allusions thing alone now? It'll make you a lot more enjoyable as a writer. Insiderism is a very ugly thing. I think it's great that you know Cary Grant's real name but it doesn't do a whole lot for your book other than alienate your readers -- incidentally, you need a better copy editor or fact checker or whatever -- Jimmy Stewart is spelled, well, Jimmy Stewart, not "Stuart." (I assume that's who you meant? Unless I'm missing an obscure Scottish actor here?) I guess that's my main criticism. Other than that, it's a fun book, and one that I think could really appeal to adolescent readers in the best possible way. It's a book I would definitely reccomend to any high-school girl -- actually, something about the tone and the voice of the protagonist reminded me a lot of the way Sassy magazine copy was written back in the day -- who's read Jane Erye and Lolita and would really dig a sophisticated literary mystery. All in all, I have to say Not Bad. I was expecting to feel thoroughly wretched after finishing this bit of hipster fiction and was pleasantly surprised to find a decent, if overwritten, mystery novel in there somewhere. Now seriously, stop with the name dropping, nobody likes a show-off.
Posted by Andrea Janes at 7:34 PM 4 comments:

What a wonderful book. This is the second Barbara Vine novel I’ve read and it’s nearly perfect. Finishing it, I got an incredible sense of loss and sadness, sympathy and longing. The protagonist is a levelheaded yet caring young nurse from Sweden who is hired to take care of "mad" John Cosway, a man in his thirties who lives at home with his awful mother and three eccentric spinster daughters. Of course darkness lies at the heart of any proper English family in their isolate country mansion, and the book is devoted to delivering these details.

What also gets me is the incredible atmosphere, the creepiness, and the great symbolism. There is a labyrinth in this house, in the library, one of the most vivid images and symbols from the book. The house itself and its odd inhabitants remind the protagonist, Kerstin, of a nineteenth century novel, Jane Eyre perhaps, and much of the book’s delightfulness stems from playing with this notion.

But I think what I liked most of all, even more than the pleasant feeling of sadness I had when I closed the book, was the way it played with (what I call) the Mary and Martha paradigm. I’ve been thinking about this for some time now, possibly because of a recent exhibit of biblical drawings I saw at the Frick museum in New York. One of the only bible stories I ever remember is the one where JC stays at a house with two daughters, Mary and Martha, and Martha works like a drudge in the kitchen while Mary hangs out with Jesus and listens to him preach, and then when she gets to anoint his feet with oil, the lucky bitch, Martha gets pissed and says, "Hey I’m doing all the work here, why is she allowed to anoint you?" And JC says something to the effect that listening to him preach is more important than mundane household duties, which I personally really like and which is why I always consider reading novels a holier task than, say, washing the dishes.

There are three spinster daughters in The Minotaur, two of whom carry on like a couple of schoolgirls with a handsome, new-in-town bohemian. One of them does so while engaged to a staid, possibly closeted preacher, enraging the third sister, who spends all her time cooking and cleaning – and getting no credit for it, mind you, not even a thank you – the perfect housewife without a husband who, incidentally, is in love with the preacher man who’s being so ill treated by her sister. Will Ida, the repressed and harassed "Martha" sister, lash out at Winifred, the liberated "Mary" sister, for all her carrying on?

Meanwhile, what about "mad" John? And embittered mother dearest? She seems awfully eager to be rid of her burdensome son, who, incidentally, was willed the house and fortune by his dying father … I can tell you one thing: she won’t take kindly to the meddling of the young nurse in the family affairs.

Read it. Read it now.
Posted by Andrea Janes at 9:37 AM No comments:

I know everybody else read this in high school, but I'm a late bloomer, so I just got around to reading Shirley Jackson's collection of dark, wonderful short stories, "The Lottery & Other Stories" this past week or so. 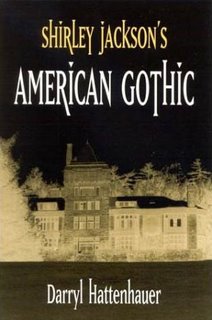 And I almost missed my subway stop four times.

She nuts, and I love here. Here are a few reasons why:

She makes you see the world in a new way -- today I overheard my landlord talking about an old lady who lives upstairs and I felt like I was in an SJ story. Suddenly everything is a fragmented narrative, each person is a repository of twisted up psychic urges that leak out in the most inappropriate ways.

She wrote a story about a jilted woman who stalks her man in a blue suit, and it's haunting and it's called Daemon Lover.

She seems to read seventeenth century witch-hunting texts for fun.

There's someone named Mr. Harris in almost every story.

She wrote the best one of the best milquetoasts in literature, David Turner. Seems a prototype for Jack Lemon's character in The Apartment, I wonder if he is.

The kids in her stories are mean and nasty, from the little boy who thrilled to the idea of eating his dead sister's head, to the little girl who refused to play the piano for the guests and called her grandma a liar.

Someone in one of her stories slaps a ventriloquist's dummy for being mouthy to a lady.

People are just so mean to other people -- they buy coveted books out from under them, they fire them for being too pretty (damn dried up old maids), drunks spurn charity ("I never served bad sherry to a guest; we're of two different worlds, madam") and, of course, they stone each other to death every June.

Ah, Shirley, what a twisted little world you created. I'm so glad I inhabited it for a week or so. And yes, Macy's' is awful, and New York will drive you crazy, and mixing whiskey and codeine is never a good idea, least of all when you're suffering from a toothache. 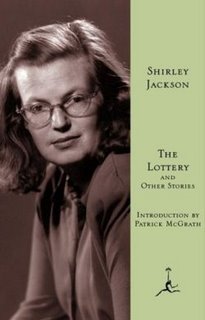 Posted by Andrea Janes at 7:59 PM No comments: