I’ve been enjoying the few inches of snow that fell on this city last week.
Wait, back up.
First off, yet another apology regarding the length of time that has elapsed since my last post. What can I say, this isn’t what I really do; I really play keyboards.
Okay, so snow. It’s been nice to look at and not too deep or slushy to walk through, and I’m glad at least a little snow fell on us this year.

But the best part about it is that the snow fell just as I was reading “Smilla’s Sense of Snow,” which felt pretty magical to me, almost as if someone up there wanted me to have a nice white background for my reading.
Oh, and wait! -- prior to that I’d been reading Faceless Killers by Henning Mankell, so it was a veritable snowy, Scandinavian extravaganza!
Truly the gods of snow and Scandinavian noir favor me.
Mankell’s “Faceless Killers” was okay, though not earth-shattering. The prose was oddly terse, to the point where it felt like it may even have been badly translated or something. Sentences like, ‘”Who could have committed such a terrible crime,’ he wondered” felt a little on the nose to me. But the mystery was genuinely gripping and I definitely loved the atmosphere that Mankell created. Cold, snowy, dark, like Sweden in winter. Still, certain elements didn’t add up the way I thought they would. I thought the protagonist’s daughter would have been of more significance than she turned out to be, and I felt that the mystery ultimately remained unsolved, which was, needless to say, unsatisfying. The protagonist had a partner who was a little suspicious to me, but his problem turned out to be cancer (or did it?). I can’t figure out if Mankell is a genius or a very lazy writer, but either way, the lack of ending will stay with me, mainly because I’ll never really get rid of that feeling of irritation the ending – or lack thereof – evoked.
Smilla’s Sense of Snow, however, turned out to be a wonder. Which I guess everybody already knows. I mean, it’s been talked about for ages, and I’ve personally had it on my “to-read” list for about eight years. So it came as no surprise to find it spellbinding. I wasn’t prepared to meet a character like Smilla, though. She is by far one of my favorite protagonists, male or female, ever. But the fact that she’s a gal like I makes her all the more wonderful. I haven’t been this impressed with a female character since I met Scarlet O’Hara (don’t laugh, I like her indomitable yet fragile spirit).
Smilla’s incredible sarcasm and wit were at the heart of her appeal, but add to that her incredible resourcefulness, determination, brains, and stamina and, well, I’m in love.
Oh yeah, and all the side characters, and the plot and the subplot and all that, they were good too.
This book makes me want to visit Greenland and get myself a pair of kamiks and pursue justice vigorously.
Here’s a sampling of wisdom from Smilla:
“Life leads us through a series of bitter, involuntarily comical, repetitive confrontations with the problems we haven’t resolved.” (Okay, so this sentiment has been expressed many times before, but I like the way it’s expressed here: “bitter, involuntarily comical.” That’s a good turn of phrase.)
“Private space must be subjected to the severest discipline if it is to withstand the dissolution, destruction and pressure to yield coming from all sides.” (The hermit in me likes this.)
“Geometry exists as an innate phenomenon in our consciousness. In the external world a perfectly formed snow crystal would never exist. But in our consciousness lies the glittering and flawless knowledge of perfect ice.” (Sigh, so true. It’s never perfect, is it? Also, I like the words “glittering” and “flawless.” Maybe I’ve seen too many diamond commercials.)
“There’s so much you could do if you had the strength.” (I want this engraved on my tombstone when I die. Witty, no?)
“With age I have voluntarily chosen certain limitations. I don’t have the energy to start over again. To learn new skills or fight my own personality or figure out diesel engines.” (Again, this perfectly sums up how damn exhausting it all is. Where’s my tea?)
“Falling in love has been greatly overrated. Falling in love consists of 45 percent fear of not being accepted and 45 percent manic hop that this time the dear will be put to shame, and a modest 10 percent frail awareness of the possibility of love.” (Yes. This time.)
“You have to be younger or at least more idealistic than I am to try to fix people who are determined to kill themselves.” (This is basically my last eight boyfriends.)
“Love arises when you have a surplus; it disappears when you’re reduced to the basic instincts: hunger, sleep, the need for security.” (Here’s hoping. It’s part of my rehab, darling.)
“There will be no resolution.” (For some reason, this doesn’t bother me at all.)

Well, here’s to winter, spinsters. Embrace it in all its chilly glory. Learn to love it for what it is, be at one with the snow, celebrate all your favorite things about the season. Curl up with some challah French toast and real Canadian maple syrup and watch Fargo, as I did this morning (well, afternoon). Celebrate our strongest detective heroines, our brave Smilla and our darling, scene-stealing Marge Gunderson.

An aside here on Marge Gunderson and the greatness that is Fargo. Always a great movie to watch in the wintertime, even more so for this spinster because it’s a heck of a good crime story. Jerry Lundergard’s ceaseless bungler is a masterstroke of characterization; Carl Showalter, Grimsrud, and Shep Proudfoot are superb foils, and each supporting character brings something exquisite to the film. But it’s Marge who wins my heart over (notice how she can capture and corral Grimsrud when no one else could? And deliver a lecture to boot?). Hell of a policewoman. I love this movie, and I salute Marge.

So here’s to my lady detectives, and to snow.
Posted by Andrea Janes at 11:35 AM No comments: 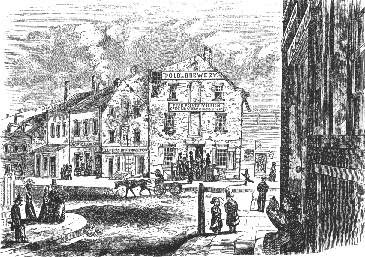 As promised, here is a special Spinster Travelogue for your enjoyment. The thing I like best about the idea of a Spinster Travelogue is that back in the Victorian era, women adventurers were not that uncommon. They'd hitch up their skirts and ride hot air balloons around the
world, like Nelly Bly. They even made a board game about it, which you can see if you go to the New-York Historical Society's gift shop. Tres fun. 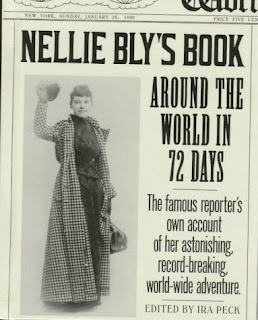 The theme of my spinsterly wanderings this time round was the Lower East Side, its history and denizens. I visited the LES Tenement Museum and had a splendid time. 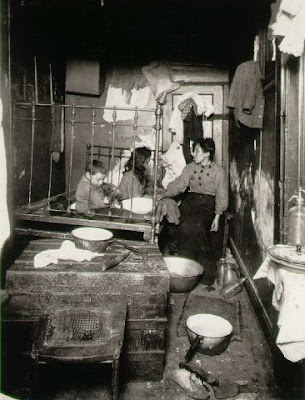 I learned about immigrants in the old timey days, and how they lived in cramped, tiny rooms and worked 8 jobs to survive, and had to rough it in a city that was tough on new immigrants.

Then I arranged an ad hoc walking tour with my most historical friend, and we used our spidey sense (spinster sense?) to find Five Points, with minimal maply instruction. It looks utterly different today, but gazing southward and squinting, one can sort of imagine what it looked
like in its heyday, bustling with gangsters and other roustabouts.

Continuing southward, we walked past City Hall (which incidentally has lovely gas lamps) and down Broadway, past Trinity Church and its ghostly 17th century gravestones (eerily lit by moonlight). Finally, we stopped at Fraunces Tavern for refreshment but were disappointed to find it boarded up (it was a Saturday night in January, so perhaps that's why – the very thing that makes Lower Manhattan so appealing after dark is the fact that it's so abandoned-feeling, which I guess is bad for business at George Washington's old watering hole). Luckily for us, though, there's a great, if tiny, historic district on Stone Street, and we were able to get some grub and booze there after admiring the cobblestone streets and well-preserved buildings.

The following evening we made our way to the Algonquin Hotel, where we met the cat greeter and sipped fancy, expensive cocktails in the Blue Lounge. I drank a Grapefruit Clarity, in the hopes that it would make me as witty as Miss Parker herself, but it failed to bring any clarity
whatsoever and on top of everything else, I left my umbrella behind.

A final note: we almost saw Prince Charles exiting the Harvard Club, but he failed to materialize even though we were told he was on his way out, and after about ten minutes of waiting we left because, well, it's Prince Charles.
Posted by Andrea Janes at 1:24 PM No comments: