Terry McGarry to read M.R. James and Heads Will Explode

Next week I will be co-hosting Ghost Stories for the Weary Urbanite, a fun show with a poncey title that will feature one new and one classic ghost story. The new story will come courtesy of Jack Ketchum, and the classic story will be read by the lovely Terry McGarry. 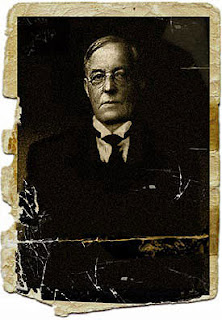 Here's where the head-exploding part comes in: this stellar SF author will be reading one of my favorite ghost stories of all time: Lost Hearts, by M.R. James.

My love for M.R. James is a tired old subject I won't bang on about any more, but let me just say for the record that this is a very thrilling announcement for me to make.

If you haven't read it yet -- don't! Come out on Wednesday April 3rd to hear Terry read it to you! Unless you live nowhere near New York City, in which case I'd recommend the next best thing: the M.R. James Podcast to the Curious. Or, you can do it the old fashioned way.

Hope to see those of you who can make it at this event. We plan to make it an ongoing thing, and the thought of contemporary horror authors gathering 'round to read the classic tales that inspired them, well, it makes me glow like some sort of very hot glowy thing.

SA
Posted by Andrea Janes at 7:08 AM No comments:

Ghost Stories for the Weary Urbanite

Next Wednesday, April 3rd, I’ll be co-hosting (along with Gordon Linzner) a night of readings of classical and contemporary ghost stories, with special guests Jack Ketchum and Terry McGarry. Ketchum and McGarry are renowned horror/SF writers, and this is an amazing chance to see them together! So, to paraphrase Lord Dunsany, come with me ladies and gentlemen who are in any wise weary of New York,  “Come with me, and those that tire at all of the world we know: for we have new worlds here.”

Readings will take place at the SoHo Gallery for Digital Art. Doors open 6:30pm. $5 donation requested. For more information, check out our Facebook page.
Posted by Andrea Janes at 8:13 PM No comments:

Found this great post over at the Bowery Boys, telling a Brooklyn ghost story I’d never heard before. And it’s thoroughly awesome. According to Henry Reed Stiles’ 1869 history of Brooklyn, the following event transpired one night in the 1820s, in a rowdy little tavern on Red Hook Lane:

“One evening at around 11 p.m., the men at the converted tavern discovered they had run out of brandy.  To replenish their supply, somebody needed only to run down Red Hook Lane to the Brooklyn ferry and retrieve more.

Less than a half-mile walk, of course, but one that passed by an old ruined fort (Cobbleshill Fort), approximately near the intersection of today’s Court and Pacific streets.  Sitting near to the fort was “a ghost-haunted spot,” a frightening, decrepit place well-known to locals, ‘about which dreadful stories are whispered, which lent wings to the feet of such unwary village urchins as chanced to pass it after dark.’

Nobody wanted to admit they were frightened to venture out alone, and yet despite their incredible thirst, nobody volunteered for the task.  Finally, a man named Boerum, thirsty and bold, declared he would head to the ferry and retrieve the brandy.”

Two hours later, when Boerum still had not returned, his friends ventured forth into the night, all a-tremble with terror and trepidation:

“Mounting, not in hot haste, they turned their horses’ heads towards the village and on approaching the haunted ground, they found Boerum’s horse standing against the fence not far from the house, and when they reach the spot itself, their companion was discovered lying senseless on the road, with features horribly distorted.”

Boerum died a few days later, still speechless, and to this day nobody knows how he perished. Did he see the ghost and die of fright? Or did he come across something still more sinister?
We cannot say. But you can still visit Red Hook Lane, a tiny alley in Cobble Hill, just off Fulton Street, and see if the spirits will tell you anything.

Read the rest of the Bowery Boys blog post here.
Posted by Andrea Janes at 4:37 PM No comments: