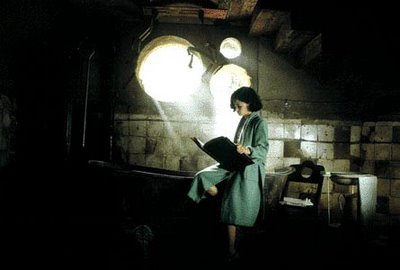 A lot has happened in the last week or so – Hugh Laurie won a Golden Globe, I finally saw Pan’s Labyrinth, and, of course, I’ve been reading – but I’ve been a lazy spinster and haven’t been keeping up with my posts on this site, for which I apologize right … now.

Well, there’s not much to say about Hugh and his accolades other than, “You’d better damn well honor him, Hollywood foreign press,” and “Hurrah for funny Brits and their witty acceptance speeches,” and, “Yes Hugh, somewhere someone is working with a crew of thieving pirates, namely me (I know someone’s been stealing my pens, I just know it).”

As for Pan’s Labyrinth, it was pure magic, and I want to marry Guillermo del Toro. It’s the best movie I’ve seen in about a year, and I will absolutely rethink my stance on spinsterism should we somehow meet one another on a moonlight night. I’ve had kind of a secret crush on him since I saw him speak at the Toronto Film Festival in 2001, and he showed us all his notebook, which was a work of art, and he was completely inspirational and I love him.

And just to give another fella we’re fond of his due, I’d like to say that Reginald Hill did a fairly decent job of entertaining me with his book Death of a Dormouse, which, while exceedingly badly written, was fun and a good read, and featured two widows (who I love almost as much as spinsters) who ultimately said nuts to their remarriages and packed up and lived together, but not before untangling a web of deception and intrigue, naturally. Not a book I’d tell fellow spinsters to rush out and buy, but worth a read if a friend happens to lend it to you, adequately gripping, and ultimately satisfying, delivering a strong female character who wasn’t always that way and deftly delineating her progression.

Frankly, this is a very good week for me to review anything because I’m predisposed to be rosy after so much goodness, and plus my cookies just came out of the oven.
Posted by Andrea Janes at 6:39 PM No comments:

My second favorite bookstore features a reading by S.J. Rozan tomorrow night, Wednesday the 10th of January at 7 PM. According to Partners, "Rozan is back with the suspenseful In This Rain. Rozan is a multiple
award-winning author, but don't think for one second she's resting on
her laurels. "In This Rain", set in our much loved murky Manhattan,
introduces former city investigator Joe Cole and his ex-partner Ann
Montgomery. Cole and Montgomery are drawn into a chilling world of
politics and murder when the suspicious death of a teenager and the
slaying of a woman raise serious questions about the powers that
be--and want to be.

Partners & Crime Mystery Booksellers is located at 44 Greenwich Avenue (corner of Charles)and their number is 212-243-0440.
Posted by Andrea Janes at 8:48 PM 1 comment:

A Is For Alibi, M Is For Maggody 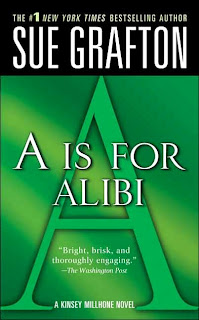 A Is For Alibi features a great mystery, devastating betrayal, and most of all an amazing spinster – Kinsey Milhone. I want to read a few more in the series before I make up my mind but I already adore Kinsey. (Down with houseplants!) The great thing about her is that she does what she wants, when she wants. She eats what she wants, lives how she wants, goes where she pleases. Hers is a truly independent life; she answers to none, except of course her clients. Having cycled through two bad (or bad-for-her) husbands, she now lives alone which any smart spinster can tell you is a breath of fresh air. The mystery in this book is pretty decent and the clues that lead Kinsey on a wild goose chase all over SoCal and Vegas captivated this reader too. But even more than the mystery, we are captivated by the character. I’ll definitely try a few more in this series … eventually.

But there’s another series I’ve suddenly got to get me some more of – Joan Hess’ marvelous Maggody series. I read Much Ado In Maggody (not the first in the series, but the earliest I could get my hands on) and I have to say it charmed the pants off me. Part of me envisions Chief Arly Hanks as a sister in kind to Kinsey Milhone, and wants to slap a cheesy label on them like, “Sassy Spinsters with Grit ‘n’ Wit” and sell ‘em as a combo to people in need of some straight talk and a dry chuckle or two. Arly Hanks is the Chief of Police in Maggody, and some days she can’t quite get into the excessive folksiness of the townspeople – or the stubborn, meddling, advice-giving of hot tempered Ruby Bee, owner of Ruby Bee’s Bar and Grill … and her mother. It’s time like this she can be quite sardonic, but luckily that flies right over most Maggodonians’ heads (well, except Rubella Belinda Hanks’). Joan Hess is so downright hilarious and her characters so rib-tickling, that I really quite forget what the mystery was about, only that it was a real barnstormer. Hess is not only hilarious, but she also has the best author photo ever: 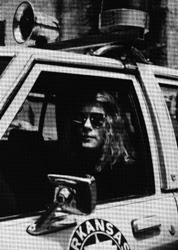 Plus, in Maggody, the locals turn a great phrase. Here’s a sampling of the local Maggody dialect, with English translations as needed.

“I haven’t got a glimmer” =“I don’t know”
“Faster than a snake going through a hollow log.”
“Vanished like a preacher on the day of reckoning.”
“Tighter than bark on a tree.”
“Icier than a widow’s bed in December.”

Isn’t it wonderful? I love the way these character talk. And I love how Arly hates her job and has more attitude then, um, a possum at Christmas.

Plus there’s a character named “Putter” in it!
Posted by Andrea Janes at 7:12 PM 1 comment:

Everyone Has His Escape

Happy New Year, Spinsters. It's been a restless holiday for this genius/waitress, but things are back to usual, more or less, and I've got that great New Year energy that makes you think temporarily that this year will be different somehow and you'll finally do all those things you always said you would do.
I read some fun books and watched some great talkies at the picutre palace, and temporarily forgot the usually omnipresent sense of nagging ennui that fogs the mind most days. What can I say, it's been a rainy New Year's Day and I'm moody.
I saw Children of Men and found it a bit on the nose, and yet who hasn't felt like they're just a cog in an unjust system, every day the same grey backdrop, just one more day till the revolution comes and shakes you out of your usual torpor.
Sigh.
I've also gotten a little Spinster feedback -- it was, "Use spell check" -- so I've attempted to clean up my act and hopefully the following review will contain much wisdom, and few mistakes.

"One Accross, Two Down"
In “One Across, Two Down” a frustrated layabout, Stanley, has grand designs on his ailing mother in law’s fortune. She’s a wise old bird though, and knows he’s a nasty piece of work, as she daily tells her daughter, Vera, who just sighs and reminds herself that marriage is for life. The mother in law, Maud, tells Stanley that the only way Vera will see a penny of her money upon her death will be if she dies of a stroke, and no other way. Her previous medical history predisposes her to strokes, but she’s been in excellent health lately, much to Stanley’s chagrin – especially when he finds out she’s shored up something like twenty thousand pounds. Stanley begins substituting saccharine for her medication, and settles down to await the inevitable, but frustratingly enough, she almost seems to be getting healthier. His problems mount when he discovers that the old bag’s got a friend coming to visit, and he’s downright bitter by the time she rolls around calling for Maud. This friend, Ethel, has words with Stanley while she’s waiting for Maud to come downstairs from her nap – she had to show up early – and rather unexpectedly has a stroke right there in front of him. While Maud snores upstairs, Stanley has a stroke of genius.

What ensues is the tale of a dastardly yet utterly incompetent and spineless villain, one who would happily dispose of two old ladies for a bit of money, gets in way over his head with con-artists who bilk him of his newly-inherited fortune, and seems to be getting closer and closer to cracking up under the strain of living with his guilt. Even mild, unprepossessing Vera begins to suspect something’s up.

Slowly, the only thing Stanley can count on is the pleasant diversion of his daily crossword puzzle to shield him from what is beginning to feel like madness. But it can’t be healthy to obsess over these puzzles, can it?

This was such a pleasant read, even though it was fairly light and lacked any great surprises. It was subtle, in its depiction of Stanley’s madness, and his characterization was marvelous. (I marvel at his complete selfishness.) Lots of great, classic Rendell touches and fun wordplay, naturally, like a Tell-Tale Heart pun when guilty Stanley develops a facial tic-tic-tic. Plus for the literary types, there’s Tennyson’s “Maud” to play with, something I liked especially when a certain old woman’s ashes (I won’t say whose) spill out of their urn to terrify Stanley (the scene recalls the lines:

“My heart would hear her and beat,
Were it earth in an earthy bed;
My dust would hear her and beat,
Had I lain for a century dead …”)
Not sure if I’d recommend this as the first book for someone just getting into Rendell, but it’s fun for the converted, and for anyone slightly contemptuous of people who think their so damn smart just cause they can figure out a damn crossword puzzle clue.
Most of all, though, I liked this great quote, which suits this spinster perfectly:
“Everyone has his escape, his panacea, drugs, drink, tobacco or, more cheaply and innocently, the steady and almost mechanical habit of reading light fiction.”
Here's to a bittersweet 2007.
Posted by Andrea Janes at 8:15 PM No comments: