It's still May, so I can still post this, even though it's a touch late: I'd like to celebrate the 100th anniversary of Katharine Hepburn's birth: 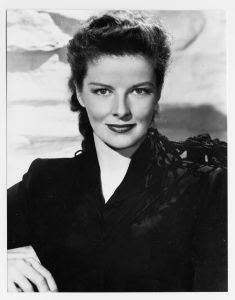 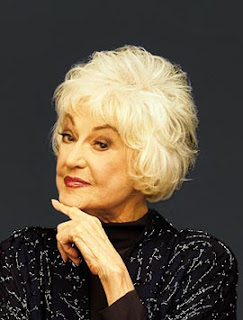 Two strong ladies beloved by spinsters everywhere, spinsters who will no doubt all end up living together in a big house in Florida and watching Golden Girls reruns and The Philadelphia Story over and over again on DVD.

I found this shot of the Golden Girls house on the website of someone even crazier than I am: 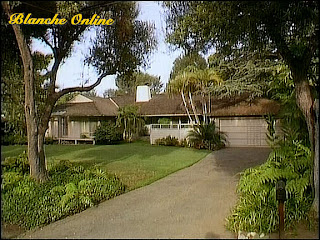 Join me on the lanai, won't you?
Posted by Andrea Janes at 2:33 PM No comments:

If you’re too cranky and/or pasty for the beach, I recommend staying inside and watching movies all summer. This spinster got off to a good start by spending most of Memorial Day weekend indoors in the dark where she belongs.

On Sunday I caught “The Band Wagon,” a 1953 musical starring Cyd Charisse and Fred Astaire. Normally I’m not one for musicals, but I have a soft spot for Vicente Minnelli because I was obsessed with “Meet Me In St. Louis” when I was a kid. (It’s a pastel Easter egg if a film, so see it if you can. Plus it’s got Judy Garland.) So I gave it a shot, and found it ridiculously delightful.

It’s one of those movies that makes you want to go to Sardi’s or 21 or The Stork Club, and drink martinis and say witty things. It’s got everything: old school Broadway mystique, fabulous dancing, in-jokes about hypochondriac writers and egomaniacal theatre directors, upstart prima donnas and washed-up showbiz legends.

Naturally there are truly memorable songs: “That’s Entertainment,” is a catchy tune about erasing the distinctions between highbrow and popular art, and the “Triplets” song is an insane number in which triplet babies – played by adults on their knees – fantasize about offing their siblings. The plot, if you need one, involves a washed-up tails-and-top hat dancer being forced to work with a snotty ballerina in a production that goes horribly awry under the direction of a high-minded and heavy-handed helmer. 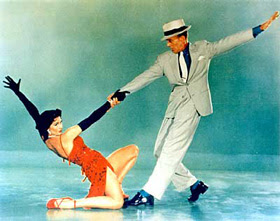 But the best thing of all – and this sequence alone makes it worth your time – one of the numbers in the play-within-a-play is a murder mystery musical in which Cyd Charisse play the femmes fatales: The Blond and The Brunette.


It’s incredible. “She came at me in sections,” Fred says, aping tough-guy speak, “with more curves than a scenic railway.” It’s delightfully staged, and there’s a great shoot-out scene in a mannequin warehouse. This sequence gets high marks for stylizing the tropes of the genre in The Girl Hunt ballet, and for its great Sam Spadish voice-over. Hilarious, and nuts. See it if you’re feeling fizzy. It’s terribly fun.

Since some girls can’t get enough, I had to rush over to another rep theatre and catch Barbara Stanwyck in Forty Guns. I love everything I’ve ever seen her in, from weepie Stella Dallas to insane pre-code amorality fable “Ball of Fire.” I just love her, period.


Forty Guns is a hell of good time. She plays a land baron(ess) with a group of forty men who she bosses around and who do her bidding, among them the sheriff. Half these guys are in love with her; one hangs himself when she won’t have him. She orders them around and threatens them with her whip, and basically buys and sells them. She’s basically the greatest hero of all time. Of course there has to be man in town who can tame her, but I won’t spoil it by telling you that part.

I always enjoy seeing Barbara Stanwyck because she’s not pretty-pretty. She’s hot, and not at all to be trifled with, and not at all kittenish, and in Forty Guns she actually looks like a grown-up woman, old enough to command respect, dammit. But she’s great at showing you a soft heart hiding inside all that, and that’s why we love her, don’t we.

See Forty Guns for her, and for the thrilling pre-code innuendo (gun stroking, admiring) and for the “High Riding Woman With A Whip” song. I’d see it for the opening scene alone, where she shakes up the dust on the plains on her white horse with the band of men in her employ.

In other news, I also watched Track of the Cat on DVD. It’s a pretty underrated movie which is a shame since it’s visually stunning (filmed in color but using almost entirely black and white set pieces, costumes, etc., a dazzling snowy panorama, mountains, swirling snow) with a claustrophobic family drama at its core. Plus, it’s got Robert Mitchum, being mean and creepy yet oddly handsome.

Especially noteworthy: Grace, the spinster sister, gets plenty of screen time, and you can feel the fire in her belly and the pain her soul. Inevitable, if you end up a shut-in with your smothering family, I suppose. There’s a great moment when the whisky-guzzling patriarch starts yelling at his frigid, unattractive wife, calling her “a clothespin.” Then he turns to his spinster daughter and yells it at her too. “You're both a coupla clothespins!”
Posted by Andrea Janes at 8:28 PM 1 comment:

A Good Spinster Is Also A Good Hostess 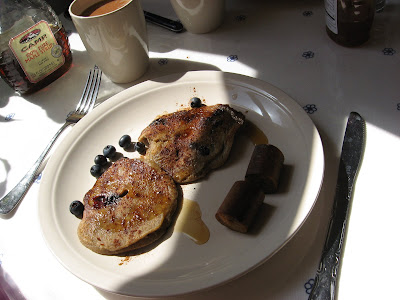 Here's a tip: When friends stay for breakfast or brunch, serve them buckwheat-blueberry pancakes!

I sprinkled these with cinnamon, drizzled 'em with pure Canadian maple syrup, and tossed a handful of blueberries on 'em for good measure. Serve with your desired breakfast meat if you have one, and a good strong cup of coffee, and watch your friends and loved ones swoon.

These hearty pancakes work especially well if you happen to live in a cabin in the Maine woods or something, but they'll do just fine if you live in Queens, too.
Posted by Andrea Janes at 6:28 PM No comments: 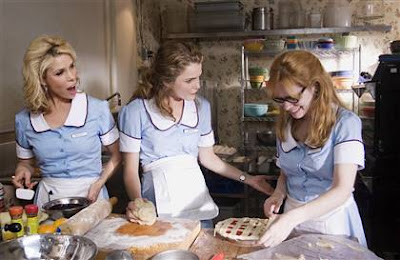 "Waitress" was a movie I was somewhat interested in but hadn't heard too much about and wasn't exactly going to line up to see. But then a friend emailed me a description of it and I stopped short when I realized: it's about pie. My god. And then I simply had to see it.

I was expecting a movie made by a woman who appreciates the deliciousness of pie to be quite an event, and I wasn't disappointed. In fact (and this is the highest compliment I can pay) it reminds me a movie that I might make, if I ever stopped eating pie long enough to make a movie.

It's a sweet film (naturally), simple in its intent and execution, funny and warm. Keri Russell plays a waitress who wants to get out of a crummy marriage but can't quite save up enough cash to run, and to top it all off she's knock up. Quite a pickle. Will she ever leave her nasty husband, win the pie contest and open her own shop? Only time – say, nine month's worth – will tell.

This movie is a love note to friendship, diners, and daughters, but it's not smarmy at all. Jenna (Russell) freely admits to resenting her baby (she calls it "an alien and a parasite" and names a pie after it, the "Bad Baby" pie, and writes it mean little letters in her head about it's stupid crib and what a pain it is), people indulge light-heartedly in guilt-free extra-marital dalliances and otherwise comport themselves badly. Jenna's husband (Jeremy Sisto) is a silly, macho man-child, who we laugh at even as we're afraid of him. The acting was great all around, especially from Russell who really surprised me with her comedic touch, and Cheryl Hines, who was just completely nuts and over the top and wonderful as the tough-yet-tender-hearted, loyal, slutty friend that every girl wants.

The last mosquito that bit me had to book into the Betty Ford Clinic.

It's Joanna Lumley's birthday today! AbFab's Patsy is one of my all-time favorite TV spinsters; I will never get tired of your champagne-swilling, pill popping ways, darling. You do us proud and are an inspiration to glamorous spinsters everywhere.

Here are some heart-warming quotes:
Eddie: [to Saffy] Oh, darling, Mummy loves you. On the day you were born I *knew* I wanted you...
Patsy: However, the day after...


Patsy: What will you drink if you stop drinking?
Eddie: I shall drink water.
[pause]
Eddie: It's a mixer, Pats. We have it with whiskey... I mean, YOU've given up drinking before.
Patsy: Worst eight hours of my life.


Patsy: Darling, you are a fabulous, wonderful individual, and remember, I've known you longer than your daughter has.