No Good From A Corpse 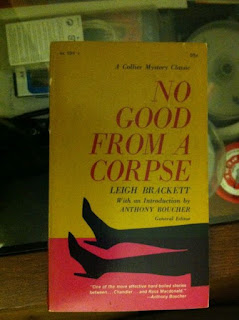 The best thing about this book was its cool cover.

I have to be frank that part of the reason why this review is delayed is because I had a hard time getting through this 200-odd page book. If it hadn't been written by Leigh Brackett, I probably wouldn't have finished it. Brackett, of course, was one of Howard Hawks' favorite screenwriters and has an origin story that can't be beat: upon reading No Good From A Corpse, Hawks supposedly said, "Get me that Brackett fellow!" to finish the script for The Big Sleep. When I heard this anecdote years ago, I immediately had respect for this woman who wrote like a man, who impressed Hawks enough to get hired as a scriptwriter, and who could transition back and forth from sci-fi to hardboiled without breaking a sweat.

Then I actually read the thing.

And suddenly everything I had prematurely admired about the book struck me as awful. Let's start with the most two most salient: the easy transitioning between genres and the whole "writes like a man" thing. Well, the more I read this book the more I felt that Brackett had written it on a bet. Like she said, "I've read a few Chandlers, I bet I can bang out a hardboiled in two weeks." I haven't found any evidence to this effect but reading the book, that's certainly what it feels like. The whole time I was reading the thing I just felt like I was sliding over surfaces; there were no real points of entry into anyone's head, nothing felt urgent, just rote. The detective, Ed Clive, has his moments, particularly his childhood reminiscences about Arcadian, unspoiled Los Angeles, but overall he just seemed sketched in.

As for the gender thing, well, Brackett has some issues. She tries way too hard to come off masculine, to the point of peppering the book with casual misogyny ("A woman driver pulled onto the road, blocking traffic on all lanes") and general tough-guy posturing. This just strike me as kind of sad, like those women who claim they don't like other women. Or -- and I hope this is closer to the truth -- Brackett was taking the piss out of tough-guy hardboiled detectives. For her sake, I hope so. Anyway, I just found all the posturing a little tiresome.


There just wasn't nearly enough going on in NGFAC to make me want to churn through it, and even the little asides about LA's oil-spoiled beaches weren't enough. Though the plot wasn't particularly hard to follow, many parts of this book felt opaque because characters and events were just dropped in without context or explanation -- I'm all for making the reader work a little, but to be honest it was a bit extreme, so much so that I often felt like I was reading a sequel or a second installment in a series.

What say you, other readers? Am I being a priss? Was this a hardboiled masterpiece and not a little bit of pastiche?  Did the sassy dialogue make up for the fact that it wasn't always clear what was happening to whom, or why? Did anyone else find Ed Clive to be a bit of a hollow man? Argue with me! I can take it -- I'm smart and tough, and really not like a girl at all.

They Shoot Horses, Don't They? 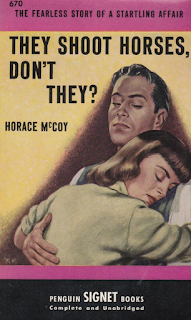 I've just finished book three in the Beach Noir Book Club, and it's, well.... you know how they say certain hardboiled writing is like a punch to the gut? Well this is more like if your own mother punched you in the gut while your father hit you over the head with a tire iron. If you find that image a little bleak, then you have an idea of the utter unremitting bleakness of this book. My god, the bleak!

So we all know the plot -- a marathon dance contest, the Depression, a girl named Gloria who hates herself and wants to die, a protagonist named Robert who dances because he doesn't know where his next meal is coming from.... almost no one in the contest does. Most of them are literally dancing for food and shelter. Things happen, people move in and out of the contest. The participants and organizers are revealed to be liars, cheats, adulterers, murders. And at the end of all... well, may god have mercy on your soul.

The first thing that struck me about Horses was the uncanny similarity to certain aspects of The Hunger Games, which I also read this year. I mean, they even have sponsors in the contest, who provide dancers with things like clothes and shoes. And they're hungry... soul crushingly hungry.

The other thing that hit home was the seediness of the beachside pavilion. Beaches are amazingly dark places and they turn on a dime -- one minute, sunny and glorious, but watch your back when the sun goes down. Then beaches are loci of murder, dumping grounds for bodies as the sea takes back her dead. And have you ever seen a beach town when it starts to rain? People running off the boardwalk with towels over their heads? It already looks like a crime scene....

They Shoot Horses is unforgettable. The imagery of the seedy seaside danse macabre in the darkest days of the depression is forever etched onto me. The swiftness, the unsentimentality of it is shattering. Characters are only sketchily drawn, because they are barely human. Gloria is a wounded animal, snarling. Robert drifts through the book because he has nowhere else to go. There's an amazing scene where he talks to one of his heroes, Frank Borzage (Robert is an aspiring film director, with great taste) and at the end of their conversation, nothing happens. No one is going to pick you up and carry you off and make your Hollywood dreams come true.