In 1933, journalist Helen Worden of the World-Telegram decided to take a jaunt. With her friend Ruth Steinway in tow, she circumnavigated the waterfront of Manhattan island, and wrote it all up in a pithy little number called Round Manhattan’s Rim. This Depression-era travelogue is a wonderful curio that opens up a vintage Pandora’s-hatbox of questions, from “What is a B.E.F.?” to “Where on earth was Spanish-town,” and “When did the Seaport stop being painted in bright colors of blue and white?” For any NYC history buff, this trove of forgotten pockets of the city long since disappeared is an incredible thrill; that goes double for an NYC history buff with any special love of the water and waterfront life. And the little unassuming moments during which it becomes especially clear that this book was written in another era create a second layer of history — this is a nostalgic text written in a time already past. 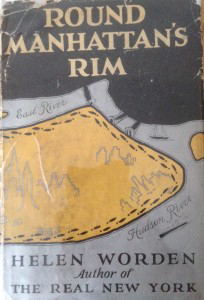 “Romance and adventure lie on the waterfront of a great city.
In the middle, up-to-date buildings obliterate early landmarks. On shore-line streets, you will find the past as well as the present, see the ever-changing character of the town and meet the pioneer types of a frontier civilization…
The Battery is familiar to those who have watched it from ferry-boats and ocean liners, contacted it by occasional visits to the Aquarium, and strolled along its wall on summer days.
But it is one of the few New York water-front localities that is known. How many have seen East Marginal Street with its wind-swept spaces? Who can tell where Jeffrey’s Light is, and where would you go to fish for striped bass in Manhattan waters, or set crab traps off the rim of the most important city in the world?”
So much of Round Manhattan’s Rim is pure gold, so endlessly fascinating and arresting in its excavation of a lost world, that to really do it justice I would have to reproduce the entire book here. The next best thing is to pluck out a few of the highlights that particularly grabbed my attention, and encourage you to hunt down a copy and do some exploring with Ruth and Helen on your own. But first, a brief overview of their walks, and how they did them.
Click here to read the rest of this post. You will be re-directed to Boroughs Of The Dead, where it originally appeared.
Posted by Andrea Janes at 12:21 PM No comments:

I recently went up to Toronto for something called a "development incubator," which is less biological than it sounds. This was a movie development incubator, we weren't splicing genes or creating life or anything. It was exciting to see one of my screenplays in development, even if the odds of a screenplay actually emerging as a fully formed film are still as infinitesimal as hatching an Indominus Rex.

On the very first day of this incubator thing, I totally by accident walked by an extremely exciting and informative historic plaque:

I'd been wanting to do a little more research on this fascinating new discovery, but kept putting it off. But seeing as how today is Canada Day and all, I reckoned there's no time like today to figure out what exactly this is all about.

Let's start with the basics. The plaque says:

On August 31st, 1896, a series of films running less than a minute each was projected from a "Vitascope"invented by Thomas Edison at Robinson's Musee Theatre on this site. On the next day, the Toronto World reported that "... the machine projects apparently living figures and scenes on a canvas screen... It baffles analysis and delights immense audiences." Known as a Dime Museum (admission was ten cents), Robinson's Musee has opened in December 1890 and featured jugglers, magicians, and aerialists; a curio shop and waxworks on the second floor and an animal menagerie on the roof. The building changed hands several times, eventually becoming, in 1899, the first location of Shea's Theatre (later situated on Bay Street). It was destroyed by fire in 1905.

The site in question, it bears mentioning, is the southeast corner of Yonge and Adelaide Streets. (You can find the exact coordinates here.)

Now I freaked out a little bit when I saw this plaque because it manages to combine so many of my favorite things in one slab of granite: old time moving pictures, Dime Museums, the nascent years of the film industry, and yes, Canada. Without Canada, we'd have no Mary Pickford or Marie Dressler, and at least one of my screenplays would never have been written (it's a high concept comedy that has them solving murder mysteries, it's great... and yet-to-be-optioned, FYI!). Incidentally, the website Toronto Plaques is amazing; it'll also lead you straight to a Mary Pickford plaque if you want to make a day of it.

A little more research yielded this little bit of insight about the Vitagraph's earliest uses in Canada, from the website Kinema, a superb resource from the University of Waterloo:

"The sole right for exhibiting the Vitascope in Canada was secured by the Holland brothers of Ottawa, as agents for Raff and Gammon, the American Vitascope promoters. The scheme devised for marketing called for the selling of franchises of Thomas Armat's Vitascope (not Edison's, since Armat had allowed Raff and Gammon to use the Edison label strictly for commercial expediency). For an initial advance payment, an agent could purchase the exclusive rights to the Vitascope for a state or group of states giving the person [or persons] the right to lease projectors (for US $25 to $50 monthly per machine) and buy, of course, Edison films. The manner and location of the exhibitions were left entirely to the franchise holder. Agents could exploit the Vitascope themselves, or, as Raff and Gammon repeatedly pointed out in their correspondence, the territories could be further divided or sub-franchised."

I like the way this site gives credit to Thomas Armat for the Vitascope. (I guess it's too much for one historical plaque to get into!)

Robinson's had high aspirations to be a museum of the first water, with "nothing cheap except the prices:"

Something new in the line of amusements will be opened to the Toronto public on Wednesday next. The buildings at 91 and 93 Yonge street have been fitted up for Robinson's Musee Theatre. The entrance leads to the second floor, on which is a large hall containing wax works and tableaux, on the third floor is the art gallery, stereopticon views and curio halls, and on the fourth or top floor is the menagerie of living wild animals, aquarium and aviary. From the top floor the public will pass downstairs in the rear of the building to the theatre on the ground floor. The hall is being fitted handsomely and will have seating capacity for several hundred people... The theatrical attractions will be of high order and will be kept free from anything of objectionable character.


According to Kinema, the introduction of the Vitascope was all part of Robinson's plan to make the "Musee" seem fancy: the Vitascope, of course, was at the forefront of science and technology, educational, and edifying. I mean, come on, it "baffled analysis!"

Kinema has only teeny, tiny picture of what Robinson's Musee looked like:


No word on the critical reaction of Torontonians to these initial short films, but I can only deduce from what the city has become that the moving pictures grew on them. (Admittedly, I am running out toe enjoy that other great Canadian pastime of drinking a few cold ones, so I don't have any more time for this post. But if you have any info, I'm all ears.)

So there you have it. My little bit of Canadiana on this fine July 1st!

It's been a while. In fact, it's been over a year since I updated this old girl. I've enjoyed just now going back and reading some out-of-date reader comments ("Your blog post on this topic is stunningly stupid").

Lately I've been blogging more over at Boroughs of the Dead, where I mostly write about macabre NYC history. Still, there are a host of other brilliant thoughts burning in my brain that I've got to share just for fun, and now that ALL OF Murder She Wrote is on Netflix, well! You can imagine I've been thinking up some pretty exciting blog post ideas (J.B. Fletcher-inspired fashion shoot, that's the first one).

And then there's Maude.

It's been a busy year for me. Besides ramping up business over at BotD HQ, I've also been slogging my way through my first adult-length novel, a ghost story. (Writing, not reading. I have read a whole novel written for grown ups before, I promise.)

I was unsure as to whether I should continue to blog here at all, what with being busy and grown up and all. But you never know when I'll want to unleash some stunning stupidity on the world. Also, would you want to live in a world without my remarks on Dale Carnegie, the Hams and Jams catalog, and whatever this is?

Reading through my old posts -- which are hilarious, by the way, I don't care if you're not supposed to praise yourself, fuck it, they're error-riddled and bizarre and terrible but also insane and entertaining and funny -- it occurs to me how long it's been since I wrote anything for FUN. Remember fun? It's a thing I used to do when I had regular employment, before I became an "entrepreneuse" and suddenly every hour that I wasn't working was an hour I wasn't making money. (Money, it turns out, is a thing you need to survive.) Writing for me now has become sort of joyless -- I just used the word SLOG for god's sake -- and it took rifling through blog posts from 2009 to see how emotionally downtrodden I've become.

So fuck it. Prepare for an onslaught of my nonsense, misuse of commas and the word "frankly," cryptic remarks apparently ungrounded in reality, and a host of other idiocies. Also be prepared that this blog might veer toward the personal, with less carefully curated quirkiness (oh, I'm on to you, Circa-2009 Spinster Aunt!) and "information" (though I will continue to assiduously post monkey-related news items... and gorilla-related news items). I just want to regain the joy in writing that I lost somewhere along the way. Before I started thinking of writing as a thing that had to be done, as an assignment. Something to sell. Something to be reviewed. A thing to be bought. One endless to-do list.

Professional writers sit down at their computer every day and write, they say! Yes, but.... that can't be all there is to it, can there? All I know is I used to enjoy this more.

Now all this isn't to say that I am not capable of writing any more. If anything, I've gotten better at my craft, more skilled, more polished, gone to more profound levels in my work. This is all true. (Especially if you're reading this and you're an agent or an editor. Then it's doubly true, I'm amazing.) But I sort of lost the.... nonsense of it. And that was the thing I really used to love. The sense of wonder, of "being puzzled at what we do not know.”

I need to get back to this. I need to bring some genuine wackiness back to my creative life. I need to have more foot-care-and-Maude nights with my funniest friend. (The health of your feet is so important, I can't stress that enough.) I need to remember the thing that I forgot.