As I'm sure many of my readers know, I conduct ghost tours of haunted locations in New York City. If you live in the city and would like to take one of my tours this Halloween season, please visit Ghosts of New York to register. 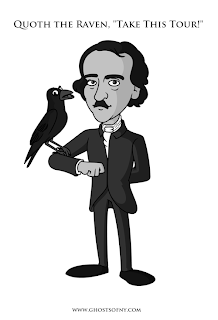 Ghosts of New York has a variety of tours with various guides. Here are the tours I will be leading:

Edgar Allan Poe and His Ghostly Neighbors of Greenwich Village

Go in search of the spirits of Eleanor Roosevelt and her pet dog Fala, Aaron Burr, the ghosts of the New York University Library and of Washington Square Arch, Washington Square Park — ghost central, the most haunted area in America — and, of course, several Edgar Allan Poe sites.
Tours are 90 minutes in duration and less than a mile in length.
Everything is handicap accessible.
Meeting Point: This tour departs across the street from Fire Patrol Station No. 2, 85 West Third Street, one block south of Washington Square Park between Thompson and Sullivan Streets, in Manhattan.
Subway trains A B C D E F M stop at the West 4th Street Station. Exit from Third Street exit and go eastward on Third Street.
Fee: $20 by credit card on line; $25 in person.
If you plan to pay cash, please call (718) 591-4741 to reserve your place.
Meeting Place:
85 West Third Street
New York, NY
Map and Directions

Start Time 2:00pm
“Poe belongs to New York. His connections to the city span the length of his writing career. He was a literatus, not a loner, and New York has long been the home of the literati. Poe belonged in the publishing capital of America.”
- Susan Amper, Poe, Toast of Gotham
This 90-minute literary and historical walking tour steps into the life of Edgar Allan Poe’s Greenwich Village of the 1840s. Visit the site of three of his former homes, trace a path into the past to gaslight-era Washington Square Park, learn of his contemporary rivals and admirers, and see where he wrote some of his most famous works. You will discover the places that inspired Poe, find out where he read “The Raven” for the first time in public, and even see where he was once treated for a head cold! Interweaving some of his most famous tales with Greenwich Village’s macabre secret histories, this tour is guaranteed to delight fans of Poe’s literary grotesques.

PLEASE NOTE: This is a literary/historical tour, not a ghost tour.

Meeting Point: This tour departs across the street from Fire Patrol Station No. 2, 85 West Third Street, one block south of Washington Square Park between Thompson and Sullivan Streets, in Manhattan.
Subway trains A B C D E F M stop at the West 4th Street Station. Exit from Third Street exit and go eastward on Third Street.
Fee: $20 by credit card on line; $25 in person.

Hope to see you all this Halloween!
Posted by Andrea Janes at 1:35 PM No comments: 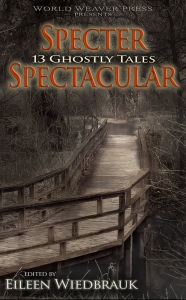 My story,"A Fitting Tribute" is included among the other awesome ghostly tales therein.

Spirits, poltergeists, hauntings, creatures of the dark—Specter Spectacular: 13 Ghostly Tales delivers all these and more in thirteen spooky twists on the classic ghost story.  From the heartwarming and humorous to the eerie and chilling, this anthology holds a story for everyone who has ever been thrilled by the unknown or wondered what might lie beyond the grave. Step inside and witness ghosts of the past, tales of revenge, the inhuman, the innocent, the damned, and more. But be warned—once you cross the grave into this world of fantasy and fright, you may find there's no way back out.

The book was published by World Weaver Press, a publisher of fantasy, science fiction, and nonfiction, dedicated to producing quality novels, novellas, collections, and anthologies. As a small press, World Weaver seeks to produce books that engage the mind and ensnare the story-loving soul. 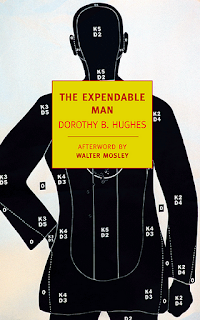 Dorothy B. Hughes' 1963 suspense novel is one of the best books I've read this year.

I recently re-read In A Lonely Place, which contains one of noir's all-time unreliable narrators. The narrator in The Expendable Man is supremely reliable: it's the world around him that shifts and changes and spirals out of control.

I wasn't familiar with the plot reveal, and if you aren't either, do yourself a favor and ignore everything written about the book until after you've read it. Otherwise you'll rob yourself of a nice gasp at about page 60. (All you need to know is that the plot concerns a doctor, Hugh Densmore, who picks up a hitchiker and is later suspected of her murder when her corpse floats up in a canal a few days later.) But it wasn't just the reveal that got me, it was the incredible tenseness and tautness that Hughes sustains throughout the whole book. After I read In A Lonely Place, I liked Hughes. After Expendable Man, I love her. In this novel, Hughes creates a multi-layered narrative where the unsaid hovers over every scene. Take for instance the book's opening sentence: "Across the tracks, there was a different world." A simple sentence, on the surface.

But there's so much going on below the surface.

I was so impressed with this book that I actually sat down and parsed the entire thing, creating a beat sheet for every chapter (yes, I have a life, don't worry; this is just something writers do). And what I found was an incredibly structurally sound procedural. All detective or suspense novels must of course have something to move the plot forward in every beat (with occasional rests) and Hughes does this masterfully. Where she surpasses the average novel is in having an added dose of tension in every beat: when Hugh and Ellen, his potential love interest, go to speak to Hugh's lawyer, he wonders about the lawyer's motives, and suspects him of flirting with Ellen right under his nose. When Hugh goes to a wedding, he sits there wondering if the police will burst in at any moment. It's classic Hitchcockian suspense -- we see the gun under the table and we're squirming right along with Hugh Densmore.

There's also an admirable structural unity to the novel, with Hugh's worst problems arising out of the very things that makes him who is he is. This keeps the novel looping in on itself, and repeatedly puts Hugh in more and more danger. His kindness gets him into trouble, his reticence puts him in even deeper. Early on in the story Hugh makes a series of tactical blunders that just made me want to scream at him but alas, Hugh is Hugh. And all you can do is sit there and watch while he makes everything worse until he finally digs himself out.

That's another part of the book's beauty: the one thing that got Hugh into so much trouble in the first place was an act that anybody is capable of. Anyone could pick up a hitchhiker, and that quotidian quality, that incredibly tiny moment of questionable judgment, makes it easy to identify with Hugh. I love a story where ordinary people paint themselves into corners and no good deed goes unpunished. And to pull it off the way Dorothy Hughes did, well... I stand in awe.
Posted by Andrea Janes at 2:29 PM No comments: