Why I love Kenny Cosgrove 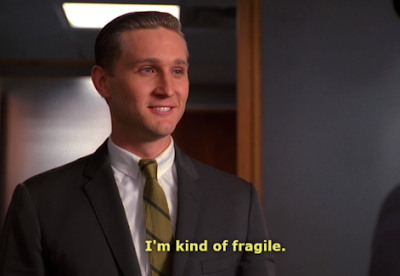 I just watched this Sunday's Mad Men and a stunning realization hit me: I think I love Ken Cosgrove! I've always suspected it, but frankly I was a little too lost in Don's eyes. It's hard to compete when that guy's in the room. But I'd always had affection for Ken. I mean, he's totally cute in that tall, blonde way that is on no level unattractive, and he modestly humblebrags about his cute little short stories. Plus the whole farm-boy-from-Vermont thing? Yes. Mama like.

But then from out of nowhere he's publishing this weird, dark sci-fi shit about rebellious robots under the all-too-adorable pen name "Ben Hargrove"? I'm intrigued. Out of my way, Cynthia. You're plain. You go now. Ben Hargrove -- or should I say, Dave Algonquin -- is mine!

So -- to recap. Why I love Kenny Cosgrove.

1) Tall. Blonde. Farm boy. Unassuming. Humble. Yes. All of the above. We've been over that. But it's a factor.
2) Judging from Cynthia's synopsis of "The Punishment of Robot 4X" (was that what it was called? I was already thinking about boning at that point) he's a badass writer. We could read each others' genre fiction in bed. He will critique me and I WILL LIKE IT.
3) Since he writes sci-fi he's clearly a nerd and we all know nerd sex is the best sex. (I don't think I'm the only girl in the world who took one look at George McFly and said, "Come to me you gangly, tenderhearted shut-in." Am I?) If you don't know the whole nerd-sex thing by now you are not, as Marilyn once said, worthy of the name woman.
4) He's nice to Peggy. He's not a dick to her just because she's a girl! Extra points, KC! You're so down-to-earth....

And finally, I would like to conclude by remarking that I am not the only woman to become recently aware of KC's devastating adorableness. At least three woman -- and one man -- have remarked on my recent Facebook/Twitter updates ("OMG I HEART KENNY FROM MADMEN 4EVER!!!") with positive feedback, and apparently some dorks on Tumblr also agree with me or something, I don't know. All I know is I will be covering all my notebooks with "Mrs. Andrea Cosgrove" from now on. And that my husband has suggested that he thinks Ken is probably gay.