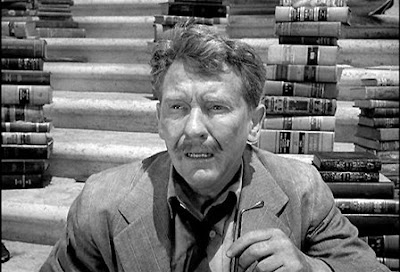 When I was laid off earlier this month I spent the first few weeks in a state of euphoria. No more data entry! No more purchase orders or FedEx PODs or invoices colored that particularly appalling shade of pink. No longer would I spend forty hours a week staring blankly at my computer, scrolling aimlessly through Excel files and seeing nothing. Imagine not having blurry bloodshot eyes, not being so drained and blank and uniquely and utterly exhausted at the end of the day by a job so mind-numbing you could perform a lobotomy on me and I wouldn't feel it. I was thrilled. I would, at last, do what I've always wanted to do. I would write.

I felt like a horse released from a tiny paddock, overjoyed at last to be stretching my muscles. There would be no more imagining what I could do if I only had the time to really, really work at it. This was it. Time enough to do all the reading and writing and research I needed. Time enough at last! Of course, anyone who's seen the Twilight Zone remembers this episode in which poor Harold Bemis wants nothing more than to be left alone to read and then ends up stranded in front of a library filled with all the books in the world and no reading glasses. Maybe this is the time when, at last, I realize I'm a talentless wench with delusions of grandeur who can't write worth a damn. Perhaps this will be the time when I confirm what I have long suspected: that I am, in fact, silly and ridiculous. Maybe I'm less a caged mustang than a fattened veal calf who, once freed from the stall, will do no more than graze aimlessly and be really boring. (And possibly collapse. Don't veal-calves have muscle-tone issues after all that immobility?)

I left work early today, and found myself on a subway car occupied by at least two people who appeared to be schizophrenic and I thought, "This is it for me now. Riding public transit with crazy people. Is this what the future holds? Is this an omen?" Well, here's what I could figure out from what I could hear (it wasn't easy to write down because schizophrenics talk really, really fast):

Schizo One: The medicine man scares away evil spirits.

Schizo Two: And god created all of us and on the sixth day he rested.

Schizo One: Beyond the infrastructure, beyond the sales tax. 100 million jobs, that's all we got. And then we got taxable deductions. Before 1991 ... sold the nation. Columbus, tribal era, medicine man, after Helen Keller, the Nazis, and electrical wire. You got demon eyes. You male or female? Night and day. Josef Mengele. 1992. People want the truth. Electrical charges. Look at telephones, cell phones, ten years ago and today.

Schizo Two: Are you Catholic?

Schizo One: Stay out of my bedroom, tell me the truth. Criminal record. What's your report card? We're already at one percent violence. A soul receptor like a satellite dish or an antenna. Spinning out like molten lava, a volcano. Control time and manage time. Nutrition and exercise. Also, versatile time, like a roller coaster.

Schizo Two: You better get out of town.

And it continued in that vein. This was certainly a confused and jumbled prophecy. I wasn't sure I should set any store by it until I got off the train and staggered home to find a fairly healthy tax bill in the mail. I'm pretty sure Schizo #1 predicted that.

Merry Christmas everybody. It's been a hell of a year.
Posted by Andrea Janes at 11:01 AM

Ouch: sorry to hear about the layoff; if you'd mentioned it before, I missed it. Good luck in the job search--in the meantime, enjoy being able to stay indoors during wintry weather, and best of luck with your writing.

2009 will hold great things non-Excel and non-invoice related; incredible things like the perspective away from a position that does not engage you or lift you up. Lo and behold!--here you are, strapped with doubts and uncertainties, but here nonetheless where you will write, write, write!

I realize now, however, that the bizarre ramblings on the train weren't some dark portent of my future and the many harrowing trials to come, but in fact the plot of Seven Pounds.

Which explains a lot.