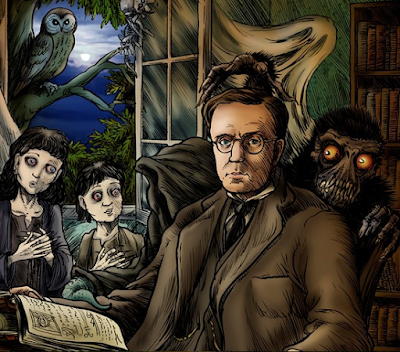 I recently discovered the existence of a delightful thing called Monsters and Miscreants, an entire card game devoted to the monstrous and ghostly world of M.R. James. Needless to say, I bought a set immediately! The tiny package arrived in the mail the other day, bursting with beautiful art and boundless imagination and -- thankfully -- very simple playing instructions. Each card features a ghost, monster, or generally terrifying character from James' stories (a text insert details the stories corresponding to each one) and numerical scores based on "Fright Factor," Physicality, Slayer Score, Dark Arts, and more. I was interested to see that two of my favorites (the Ash Tree Spiders and the Lost-Hearted Children) had middling yet respectable fright factor scores of 76 and 75 respectively.

I personally can't wait to play with my set, though I may just end up admiring the cards for a little while -- and doing some re-reading -- first. In the meantime, I harassed the creator of the card game until he granted my a Q&A for this blog, so please enjoy my conversation with James Drewett, and order your own pack today -- supplies are limited!


SA: How did you decide to make an M.R. James card game? Where did the idea come from? 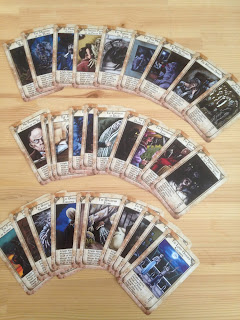 JD: I've always been a gamer, but have found that the main literary world that is portrayed in gaming is the Cthulhu Mythos of H.P. Lovecraft. I love the variety of monsters and ghosts in M.R .James and thought it would be fun to see these in a game. Monsters & Miscreants is a simple game that came about while creating my main M.R. James card game, 'Cards for the Curious'.


SA: How did you end up working with your collaborator and illustrator?


JD: While trawling the internet for M.R. James images, I came across a lot of fantastic, vibrant images on deviantart.com which I sourced to an artist at loneanimator.com. I sent him an email and it turned out that he was the brilliant Swedish artist and designer, Richard Svennson. We had mutual contacts in Mike Taylor and Will Ross from the entertaining M.R. James podcast 'A Podcast to the Curious', and Richard was only too keen to come on board.


SA: What is your background? Are you a game designer?


JD: I've been playing and designing games since I was a kid; however, most of my designing has been for myself, friends and family. I have a life-long love of literature, and now teach students with dyslexia - hopefully helping them to find a love of reading for themselves.


SA: Can you describe the basics of the game in a few words? How did you decide on the rules and structure of the game?


JD: Monsters & Miscreants is a very simple trump-style game, familiar to most people and easy to learn. All the players have a hand of cards. Each card shows a set of categories with statistics, such as Fright Factor, Wall of Weird, Slayer Score etc. On your turn you choose a category on your top card which you hope will beat your opponents' cards. The object of the game is to win all your opponents' cards.


JD: It's difficult to choose a favourite "monster" - but I like the guardian of the treasure in The Treasure of Abbot Thomas, just for its tentacled weirdness! Again, difficult to choose a favourite M.R. James story - but I think 'A Warning to the Curious' contains all the Jamesian ingredients for a good story: somebody uncovers an artefact that should have stayed hidden, he is stalked by a presence that appears as shadows, fleeting glimpses, bony footprints in the sand, while all along James builds the tension to a truly horrific climax.


SA: Who else do you read? What are your other favorite ghost stories/authors?


JD: I have always read an eclectic range of modern and classic literature, and now am challenged to read an even wider range as I run a local book club. I think Sheridan Le Fanu would rank among my other favourite ghost story writer.


SA: What else are you working on now? What do your future projects look like?


JD: I am aiming to bring out a range of M.R. James games under the banner of 'Pleasing Terror Games'. My hope is to bring the stories of M.R. James to a whole new audience through the route of gaming. I am planning a story telling game as well as a set of cards which will go play alongside Monsters & Miscreants to create a new game.

However, my main project is 'Cards for the Curious' - a strategy card & dice where you play the role of the protagonist in the main M.R. James stories - embarking on a terrifying journey of the imagination, where you try to survive the nameless dread that hunts you, with either your life or your sanity intact. Players relive all the main drama of the actual tale, but, with a host of other encounters thrown in the mix, no story is ever told the same way twice. The concept and prototype have been produced and Richard has agreed to work on the art and design. So watch this space!

A terrifying journey of the imagination where I try to survive the nameless dread that hunts me? I'm sold! You should be, too. Follow the work of James and Richard over at Pleasing Terror.